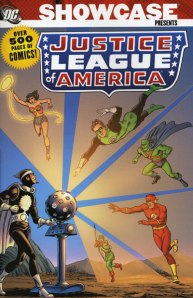 Overview: The Justice League of America – the World’s Greatest Super-Heroes! From across the DC Universe, the seven heroes (Superman, Batman, Wonder Woman, Flash, Green Lantern, Aquaman, and Martian Manhunter) band together to defeat villains too great to be handled individually.

The JLA were introduced in The Brave and the Bold in early 1960. After three issues, they graduated to their own book. Based out of a cave in Happy Harbor, the heroes would protect Earth from alien invaders, magical sorcerers, and diabolical scientists. Many long-lasting villains were introduced during this run, such as Starro, Amazo, Despero, Felix Faust, and Doctor Light. All of their adventures were captured in a journal file by the JLA mascot, Snapper Carr.

When the JLA got their own book, Batman and Superman made very few appearances in the title during this run. Being featured in so many books of their own at that time, they could give the other heroes a chance to shine. If they did appear, they often were absent from the front cover of the comics. To help increase there roster, the JLA added new members in Green Arrow (Issue #4) and the Atom (Issue #14).

Why should these stories be Showcased?: I’m torn on this volume. Historically, this is an important volume. For over 25 years, JLA brought together DC’s biggest stars together in one book. According to urban legend, the success of the Justice League title prompted Timely (Marvel) Comics to react with their own group title, Fantastic Four. Despite its achievements, these stories, especially the ones that feature a minor villain that is never seen again, can be hard to get through. The early days of the JLA have been revisited many times, due to continuity changes, so the origin told here is not the origin being used today. Quite honestly, the dialogue is sexist in the way Wonder Woman is portrayed when the group gets together in their headquarters, expecting Diana to serve as secretary, do the baking, and organize the cleaning. Bottom line, I would not say this has to be on a reading list. There are much better examples of the Justice League done right.

The heroes used in this volume represent a mix of Golden Age heroes (Superman, Batman, Aquaman, Wonder Woman, and Green Arrow) who all stayed in publication from their first introduction, and the new wave of Silver Age heroes (Martian Manhunter, Flash, Green Lantern, and the Atom) that had been introduced within the previous five years.

If you like this volume, try: JLA: Year One by Mark Waid, Brian Augustyn, and Barry Kitson. Released as a 12-issue miniseries in 1998, it has been collected twice as a trade paperback. This is one of the aforementioned revisions to the JLA origin to match the story continuity of the late 1990s. The story focused on Aquaman, Martian Manhunter, Green Lantern, Flash, and Black Canary, who replaced Wonder Woman in the new continuity, banding together to form the league. This is a fun read and the Kitson art is pitch-perfect for this project.