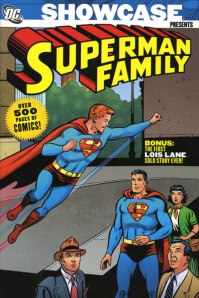 Overview: Despite this being titled a Superman Family volume, this is essentially a Jimmy Olsen volume, as it collects the first 22 issues of Jimmy Olsen’s solo series.

The Jimmy Olsen stories are simple one-and-done tales that do not give a second thought to continuity. The stories start with a few basic idea reused over and over (Jimmy trying to get a big news story to impress Perry White; Jimmy adds a new souvenir to his Superman collection; Jimmy offers up himself as a test subject to a scientist trying a new device) and proceed from there for six to eight pages.

Why should these stories be Showcased?: You have to be a die-hard fan of the Silver Age of comics to appreciate the stories told in here. Most Silver Age stories do not hold up in comparison to current stories. These stories were truly written for and generally sold to kids. The stories are fun to read, provided you keep them in the context of the era in which they were first published.

If you like this volume, try: the Amazing Transformations of Jimmy Olsen TPB. This volume collects the various stories from Superman’s Pal Jimmy Olsen, when the title character is morphed into another character, either due to radiation, ingestion, stupidity, or plain luck. The Super-Brain, the Human Skyscraper, Elastic Lad, the Human Flamethrower, the Human Octopus, Jimmy the Genie, the Wolfman, the Giant Turtle Man, the Human Porcupine, Bizarro Boy, Chameleon-Head Olsen, and so on.