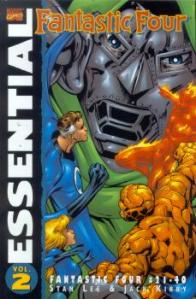 New villains are introduced that become mainstays in the Marvel Universe, such as Dragon Man, Diablo and Attuma. The mysterious Medusa with her mentally-controlled hair makes her debut as a member of the Frightful Four, but her Inhuman background remains secret for another year.

What makes this Essential?: My initial reaction to this volume was to say that it is not as important to have on your shelves, compared to the other volumes in the Fantastic Four line. But the more I thought about it, the more I felt like the Marvel Universe really started with this volume.

Up until the late 1950s, comic-book super-heroes did not cross over into other character’s books. Yes, Superman and Batman would team up in World’s Finest, but Superman did not make appearances in Batman or Detective Comics, and Batman did not make appearances in Action Comics or Superman. If Superman went to Atlantis to see Lori Lemarls, Aquaman is never seen or even mentioned. Characters and titles were treated as stand alone silos, so that there would be no mixing of brands.

DC broke this trend with the creation of the Justice League of America. For some reason, DC executives feared over-exposure of Batman and Superman, so they limited their appearances for the first two years of the JLA title. But this opened the idea that all of these heroes were on the same world and could interact with each other.

Jump ahead to 1962. Fantastic Four has been around for a year, and was an early success. New characters, such as Thor and Hulk, were introduced in other titles, and from the very start Stan Lee made it clear that they were all part of the same world. By 1964, with so many new characters debuting every month, it was natural for Lee, who was still writing the majority of Marvel Comics at this time, to use these characters in all of the books. It was natural that these characters would appear in the  Fantastic Four, as the first heroes of the Marvel Universe were Lee’s primary focus.

In this volume, we see the Fantastic Four team up with the Avengers to stop the Hulk; work with the X-Men to stop the Mad Thinker and the Puppet Master; and work with both Dr. Strange and Daredevil on separate encounters with Dr. Doom. The Fantastic Four even travelled to the Skrull throne-world, thereby truly creating the Marvel UNIVERSE. So yes, give this a look!

Footnotes: In issue #25, Stan Lee made a key mistake that got added to the Marvel mythos. He makes numerous references to the Hulk’s alter-ego as Dr. Bob Banner. When readers pointed out that his name is actually Bruce Banner, Stan Lee explained it away that the character’s full given name is Robert Bruce Banner, and that he prefers to go by his middle name.

If you like this volume, try: Marvels by Kurt Busiek and Alex Ross.  Every few years, the right combination of story and art merge to tell a breath-taking story. Plenty of stories have been told about the early years of the Marvel Universe. Comics have been painted before. But bringing these two elements together created the amazing Marvels series. Busiek weaves a story where the common man, in this case newspaper photographer Phil Sheldon, captures the key moments of the Marvel Universe with his camera. From the debut of the Human Torch to the arrival of Galactus, Busiek shows how the numerous comics all weave together into one large story. Speaking of large, Ross’ art gave us a realistic peek into how heroes would really look like in the world, such as his image of Giant-Man walking through the streets of New York City. This is a must-have in any comic collection!