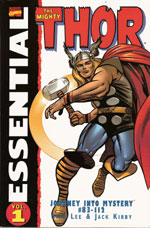 Overview: Donald Blake, an American doctor vacationing in Europe, finds himself being chased by the Stone Men of Asgard. Hiding in a remote cave, Blake finds an ancient walking stick. Tapping that stick on the ground transforms the weak doctor into the mighty Thor, God of Thunder and Prince of Asgard. Armed with his hammer Mjolnir, Thor sends the Stone Men back to their planet, and establishes himself as the protector of Midgard (Earth).

Over the next two years of stories, we are introduced to Blake’s nurse Jane Foster, who is in love with the thunder god. We meet the royal family, such as Thor’s father Odin, King of Asgard, and his step-brother Loki, god of mischief. We see his friends who stand by Thor’s side in battle and in celebration, like Balder the Brave, Heimdall, Tyr, and the Lady Sif. And any hero is only as great as the villains he battles, and Thor battles humans to aliens to Asgardians.

While this title develops it’s own story and mini-universe, it does crossover into the mainstream Marvel Universe. Thor’s teammates in the Avengers make multiple appearances, and Thor even battles Magneto and his Brotherhood of Evil Mutants. The final issue in this collection features a battle between Thor and the Hulk, the first of many such bouts.

This volume also includes the Tales of Asgard stories that were a back-up feature beginning in Journey Into Mystery #101. These stories gave readers the back-story of the Asgardians, telling tales of Thor and Loki in their youth, and exploring the nine realms. Many familiar characters, such as Lady Sif, Hela, and Surtur, were introduced into the Marvel Asgardian universe through these features.

What makes this Essential?: This is a decent introduction to Thor, Loki, Odin, and the other Asgardians, but these are not great stories. When I think of “Thor”, I associate words such as “Epic” and “Mighty” and “Grandeur”. I don’t think these issues give me that. Thor does not stand out against other humans, Asgard looks small, Loki comes across as more annoying than evil. Lee & Kirby will have much better stories collected in later Essential Thor volumes. Other creative teams will have even more impressive runs with the Thunder God. This volume is a good way to introduce a reader to the title character, but I don’t think this is the volume to make someone a fan of Thor.

How many Executioners does one god need?: In Journey Into Mystery #84, Thor battled the Executioner, a pro-Communist warlord trying to wrest control of the nation San Diablo. Thor helps the democratic forces stop the revolt, and the Executioner is, well, executed by his troops as he tries to escape. Whether is was his desire to re-use a good name or an oversight on his part, Stan Lee used the name Executioner again in Journey Into Mystery #103, when he introduced the Asgardian/Storm Giant who is often partnered with the Enchantress.

If you like this volume, try:  the 2007 relaunch of the Thor title by J. Michael Straczynski and Olivier Coipel. Thor and the other Asgardians had been dormant in the Marvel Universe since the end of the previous Thor series in 2004. In this story, JMS and Coipel bring Thor back to the land of the living, as he seeks out his fellow Asgardians and looks to rebuild Asgard, which now hovers over a small town in Oklahoma. This is a great story to be introduced to the entire concept in a more current time-frame. This has been collected multiple times in paperback and hardcover editions, so you should have no troubles finding this.