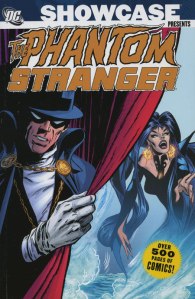 Overview: Meet the Phantom Stranger, a man with a mysterious background forced to live in the shadows of the supernatural and unexplained. No one knows where he came from or how he came to be.

The Phantom Stranger first appeared in a six-issue self-titled anthology in 1952. Those stories are reprinted in Showcase #80 and the first three issues of the 1969 series. Similarly, Dr. Thirteen first appeared in the pages of Star Spangled Comics, but his early stories are collected in these first issues as well.

Beginning with issue #4, new ongoing stories featured both characters, either together in the same story or in solo stories. These early issues have Dr. Thirteen at odds with the Phantom Stranger, trying to prove that he was a fraud. Dr. Thirteen eventually comes around to accept the Phantom Stranger as an ally, even if he may not fully understand him.

Why should these stories be Showcased?: Read this for the art – most covers were done by Neil Adams, and many issues featured work by Jim Aparo. As much as I like the character of the Phantom Stranger, I believe he works much better as a supporting character, such as his appearances in the Justice League of America. I find this to be an average collection.

If you like this volume, try: tracking down Secret Origins #10 (January 1987). In 1986, DC launched an ongoing Secret Origins series to detail the new origin stories of characters following the events of Crisis on Infinite Earths. Most issues were double-sized and featured two characters, often a Golden or Silver Age character in the first story, and a modern age character in the other. For this issue, the entire issue was given over to the Phantom Stranger, with four possible origin stories. Each story featured a different creative team: Mike W. Barr & Jim Aparo; Paul Levitz & José Luis García-López; Dan Mishkin & Ernie Colón; and Alan Moore & Joe Orlando. The last story has been reprinted in the various editions of DC Universe by Alan Moore collections. The other stories can only be found in this issue, so it is worth finding.