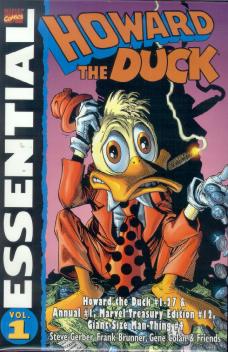 Overview: Created as a back-up character in the Man-Thing stories, Howard the Duck was a cigar-smoking, fowl-mouth duck that should never be confused with any other ducks at Disney or Warner Brothers. Howard moved into some solo stories in the Man-things books before crashing into the mainstream Marvel Universe, albeit Cleveland.

Following the obligatory cameos by Spider-Man and later the Defenders, Howard the Duck settled into a normal life – just a struggling duck looking to find work, and living with his friend, Beverly Switzler. Along the way, Howard would reach great heights (running as the All-Night Party candidate for the 1976 presidential election) and deep lows (wrestling for money). He met a lot of oddball characters along the way, such as the Kidney Lady and the Space Turnip.

Written by Steve Gerber, most of the art in this book was done by Gene Colan, who really does make Howard seem fully alive and part of the normal world of us “hairless apes”.

<WAAAUGH> makes this Essential?: Howard the Duck provided a brutally honest social commentary on life in America in the 1970s. Steve Gerber used Howard to voice the unsaid truths that needed to be said. From politics to kung-fu, and from the Moonies to the Conservative movement, Howard helped verbalize the absurdities and the craziness of that decade. So, from a historical point of view, it’s worth a look. This volume collects all of Steve Gerber’s work with the character in the 1970s, but not all of Howard the Duck’s appearances in that era. So maybe this would be better billed as the Essential Howard the Duck by Steve Gerber.

Webfootnotes: Issue #16 was an odd issue, which is saying a lot considering the over-all tone of the title. Gerber had fallen behind with his writing assignments, having finished up the annual in addition to the bi-monthly book, while relocating from the East Coast to Las Vegas. So he penned a series of text pieces that were internal monologues of his thoughts as he drove cross-country. The issue was a collection of two-page spreads, with background art provided by a variety of artists (Colan, John Buscema, Ed Hannigan, Al Milgrom, and others). Never fear, the ongoing story resumed with issue #17.

Parts of (Adventure into) Fear #19 and Man-Thing #1 are also reprinted in Essential Man-Thing Vol. 1.

If you like this volume, try: the Howard the Duck Omnibus. While I try to advocate other works to explore with this section, reading this omnibus will give you the chance to finish the original run of this title. Steve Gerber was removed from the title following issue #27. The series ran for four more issues until #31. At that point, Howard took up residence in his own black-and-white magazine. The magazine ran for nine issues, and have not been reprinted as of this post. That would not be the end of our fowl-feathered friend. Howard returned in 1986 (right around the time that Howard hit the big screen) for issues #32 and #33, before moving into Marvel limbo. He has been brought back from time to time in mini-series or Marvel events, but this is the longest sustained story-run of Howard. This omnibus includes the full run through issue #33.