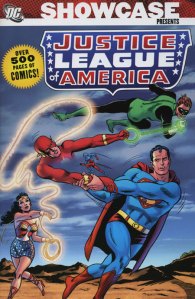 Overview: Welcome to the second volume of the World’s Greatest Super-Heroes. The Justice League of America assembles to stop villainy however it may present itself, whether from a super foe or an alien invasion.

Many familiar foes from Vol. 1 return to challenge our heroes, such as Dr. Destiny, Amazo, Kanjar Ro, and Despero. New villains are introduced with the deadly Queen Bee, and the mad Brainstorm. When the Crime Syndicate shows up, which is made up of evil counterparts for Superman, Wonder Woman, Batman, Green Lantern, and Flash, it takes the combined might of the Justice League and the Justice Society to stop their foes and imprison them in limbo.

Why should these stories be Showcased?: If you are a fan of the DC history, these are must read issues to see how the multiverse started. The Justice Society returned to duty in the Silver Age in Flash #137, so it was only natural that they team-up with their counterparts, the Justice League. And when a story works once in comics, it’s going to be repeated over and over and over. This volume gives us two separate appearances of the Justice Society, and the first appearance of the Crime Syndicate. Now, if you are wanting to read the JLA-JSA team-ups, look for the Crisis on Multiple Earths series of trade paperbacks. With beautiful new covers from Alex Ross, this series has released six volumes so far, reprinting the JLA-JSA team-ups through 1982.

In terms of the Justice League stories presented in this volume, things get better in comparison to Vol. 1. The stories are not as awkward as prior issues, which is a plus. Gardner Fox seems to have a better idea of how these stories should work. Mike Sekowsky’s art is decent, but he still seems to have trouble with the figures of Superman and Batman from time to time. Overall, these are still not as good as the Justice League can be. If you are a Justice League fan, pick it up for the team history.

Footnotes: Hawkman joins the Justice League in issue #31, after the Earth-2 Hawkman had already appeared twice with the Justice Society.

In the Jay Garrick appearances in the Flash comics, he lived on a parallel Earth. It was not until Justice League of America #21 were the Earths first numbered (Earth-1, Earth-2, Earth-3).

If you like this volume, try: Crisis on Infinite Earths by Marv Wolfman and George Perez. By the mid-1980s, DC was feeling handcuffed by 40-50 years of continuity. It was becoming harder and harder to explain how a character served in World War II but had not aged a day since then. In the early 1960s, DC thought they had figured a way out by introducing the concept of multiple earths. So the Superman that fought in World War II was on Earth-2, and our current Superman is on Earth-1. But that just made things even more complicated as new Earths were added left and right (Earth-1, Earth-2, Earth-3, Earth-6, Earth-8, Earth-S, Earth-X, and more). So, in an attempt to make things right, DC came up with what is considered to be the first company-wide crossover for any publisher, the aforementioned Crisis on Infinite Earths. This story brought all of the worlds together into one universe, with just one Earth. Many duplicate version of characters were killed off, and a new history was written to cover the united DC Universe. This is an incredible story that should be in everyone’s collection. It’s been reprinted numerous times in multiple formats, so it should not be hard to track down.