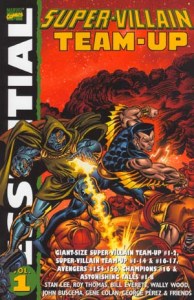 Overview: Bring on the Bad Guys! With so many comics told from the perspective of the hero, sometimes you want to view the world from the other side of the confrontation.

For most of this book, the focus is on Dr. Doom, ruler of Latvia. The stories from Astonishing Tales deal with Dr. Doom trying to stop a rebellion, which turns out be organized by Red Skull. Doom’s attention is soon turned towards the Black Panther, as a skirmish develops between Latveria and Wakanda – not the first time that’s happened, and certainly not the last time either.

When the actual issues of Super-Villain Team-Up starts, it’s between Dr. Doom and Namor, the Sub-Mariner. Depending upon the needs of the story, Namor has been both hero and villain over his many years in comics, and we see that in this volume. It starts out with Namor and Doom in conflict, which is then turned into an uneasy alliance of sorts. While battles rage between Namor and the Atlantean warlord Attuma, which crosses over with the Avengers title, Dr. Doom must continue to stave off rebellion. But the mysterious Shroud shows up — but is he hero or villain?

Towards the end of the run, the publishing schedule got quite erratic. The title came to an end, but the final storyline was wrapped up over in the pages of the Champions, with the team loaded with former X-Men facing off against Magneto. The Red Skull makes another appearance in the final two issues published a year apart.

What makes this Essential?: This really is not an essential book. There, I said it. Hate me or love me for it. What we have here is a loose conglomeration of stories that are grouped together under the banner Super-Villain Team-Up (SVTU). Given the number of various talents that worked on this throughout the 1970s, this was never intended to be one giant story. Instead, we get Writer 2 picking up on the story threads left by Writer 1 two years ago in a story, and continuing them for three issues until Writer 3 came in and changed the threads completely.

Personally, I would have rather seen (and still hope to see someday) an Essential Doctor Doom volume. Collect his various appearances all over the Marvel Universe in one edition. That would be much more interesting to see collected then this SVTU collection.

If you like this volume, try: the Secret Society of Super-Villains (SSSV) from DC. This came out during the mid-1970s, around the same time that SVTU was on the stands. DC’s story had a team of villains assembled (Gorilla Grodd, Captain Cold, Mirror Master, Sinestro, Star Sapphire, Lex Luthor, Bizarro, Darkseid, and many more) working together to take on jobs that they couldn’t do as solo criminals. Much like SVTU at Marvel, the SSSV storyline continued in other DC books long after the comic was cancelled. DC has recently collected the entire SSSV storyline into two hardcover collections.