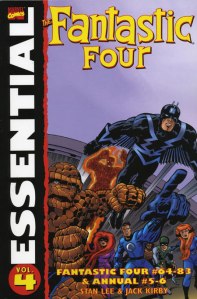 Overview: Have you caught your breath yet from Essential Fantastic Four Vol. 3 yet? Hurry up, because the Lee & Kirby keep volume 4 moving at full speed. Hang on as we continue one of the greatest comic book runs of all time.

Let’s start out by going cosmic. The Fantastic Four encounter a mysterious destructive robot known as Sentry 459. We find out later that it was left there by the Kree Empire, led by the Supreme Intelligence and represented by Ronan the Accuser. We later meet the being known only as Him, who later becomes much better known as Adam Warlock.

Returning to Earth, we are treated to more adventures with the Inhumans. Crystal starts hanging out with the team more and more, and eventually earns her own blue #4 jumpsuit, as she takes Sue’s place on the team. But why would Sue be leaving the team? Reed announces to the others in Annual #5 that Sue is pregnant, and she gives birth to Franklin Richards in Annual #6.

A host of foes makes their first appearance in this volume. The Psycho-Man shows up, playing on the fears of the team. And if you thought Blastaar was the only bad guy in the Negative Zone, then let me introduce you to Annihulus. Earth is also visited for a second time by the world-devourer Galactus. Good thing the Fantastic Four have the Silver Surfer on their side.

The biggest surprise of this book? Not a single appearance by Doctor Doom! Don’t fret, as the good leader of Latveria is the main foe of issue #84, which leads off Essential Fantastic Four Vol. 5. As much as we may miss Doom, there really wasn’t room to fit him into any of these classic stories by Lee & Kirby.

What makes this Essential?: This volume is very good but gets overshadowed by the volume before it. Kirby continues his creative hot streak, and Lee introduces new concepts and characters that continue to impact the Marvel Universe today. This is a volume to read when you want to impress your casual comic book friends that still slobber over the issues in the prior volume (and rightfully so). Read this and brag about the second appearance by Galactus, and how Franklin joined the team! Pick this up and enjoy the “World’s Greatest Comic Magazine!”

If you like this volume, try: an all-new Fantastic Four team from the early 1990s. Writer Walt Simonson and artist Art Adams were the creative team on the Fantastic Four book, and introduced a new team to take the place of Reed, Sue, Johnny, and Ben. The new team featured Spider-Man, Hulk, Wolverine, and Ghost Rider. It was a fun and popular take on the Fantastic Four concept and the back issues were in high demand at one point. The easiest way to track this story down is by finding the Fantastic Four Visionaries: Walt Simonson Vol. 3, which will give you the entire story arc, plus a few more stories featuring Marvel’s first family.