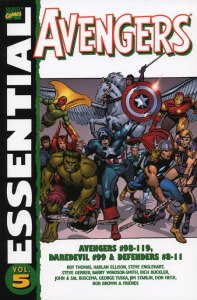 Overview: In the aftermath of the Kree-Skrull war, the Avengers have returned to Earth to find that one of their members is missing. Tracking down the Warhawks, the Avengers are reunited with Clint Barton, who has dropped the Goliath act and is now back to the bow and arrows of Hawkeye. With him, they find another former Avenger, Hercules, confused and disoriented. What a way to start the next volume of Essential Avengers!

The disoriented Hercules leads into a storyline that leads into #100 anniversary issue, which brought back every former Avengers – including the Hulk – in a battle between Earth, Asgard, and Olympus. Following that, the Avengers face numerous familiar foes, including the Grim Reaper, the Sentinels, the Space Phantom, and Magneto.

The highlight of this volume is the Avengers-Defenders War, which crossed over between the two titles, both scripted by Steve Englehart. Loki, the step-brother of Thor, and Dormammu, long-time foe of Doctor Strange, manipulate the two super-teams into battle. This has been reprinted multiple times, including in the Essential Defenders books.

The volume concludes as the Avengers make another return to Rutland, Vermont, for the annual Halloween parade. Once again, chaos ensues as the Collector shows up trying to complete a set of Avengers.

What is interesting with this volume is Englehart advancing the characters into relationships, bordering on a soap opera. The Scarlet Witch and the Vision start a relationship, much to Quicksilver’s chagrin. Mantis shows up, and wants to claim the Vision as her own. The Swordsman has fallen head over heels in love with Mantis, but can’t get the time of day from her. All of this gets resolved in the next volume.

What makes this Essential?: We see another transition in the Avengers title as Roy Thomas steps down as writer, and Steve Englehart comes in as the new scribe of the book. The X-Men – friend and foes – make numerous appearances during a time when their book was strictly a reprint title. Englehart scripts one of the first multi-part crossovers between the Avengers and the Defenders. With the introduction of Mantis, we start approaching the Celestial Madonna storyline that will dominate Essential Avengers Vol. 6. The downside to this volume is the art, which suffers from a lack of consistency. If you liked Essential Avengers Vol. 4, you should probably have this volume as well to continue the run.

If you like this volume, try: Avengers: Under Siege by Roger Stern and John Buscema. Running in Avengers #270-#277, the Masters of Evil are back with a vengeance, taking down the Avengers one-by-one. During the onslaught, Hercules is beaten within inches of his life; control of the Avengers Mansion falls over to the bad guys; and even the butler Jarvis is caught up and injured. But falling back to the group’s origins, the Wasp rallies the troops, calling in Thor and Captain America to defeat the Masters of Evil. When fans are asked to name the best Avengers stories, this is easily in the top five for everyone, if not the top choice. This has been collected multiple times and remains in print nearly 30 years after it initially ran in the monthly book.