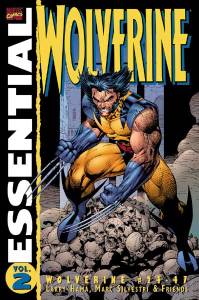 Overview: Welcome to the continuing solo adventures of Wolverine, who proves over and over again that he is the best at what he does, and what he does best is not very nice.

Returning to Madripoor, his home away from the X-Men, Wolverine once again gets into a skirmish between the gang lords on the island. Once again, Logan gets a helping hand from Karma, a former member of the New Mutants who works for her uncle.

In this volume, writer Larry Hama comes on board as the regular scribe for the book. Joining him at this time would be one of the hot artists of the era, Marc Silvestri, who would put in time here before jumping from Marvel to become one of the co-founders of Image Comics.

During these stories, we see the return of Lady Deathstrike, who wants the adamantium from Wolverine’s bones. This leads into an interesting time-travel story with Puck from Alpha Flight that sends the two back to Spain in the late 1930s, caught up in the Spanish Civil War with Ernest Hemingway. Once that caper wraps up, Donald Pierce from the Hellfire Club plots another attempt to kill Wolverine. This time by creating an android duplicate of Wolverine, dubbed Albert, and partnering him with an android child, Elsie Dee, who is packed with enough explosives to kill even Wolverine. Both androids rebel against their programming, preferring to stay alive over completing their assigned missions.

What makes this Essential?: This volume starts the Hama-Silvestri run on the book, which turns out to be a good partnership. The problem I have with this book is that none of the stories are memorable. I finished reading this a week ago, and I am having a hard time recalling stories other than the Puck & Ernest Hemingway four-parter, and the way too-long story arc with Albert & Elsie Dee. As a result, these may be OK stories, but I can’t call them Essential.

Footnotes: The cover spells Silvestri’s first name with a K (Mark), but it should be spelled with a C (Marc).

If you like this volume, try: the Havok & Wolverine mini-series from 1988. Written by Louise & Walt Simonson, with art by Jon Jay Muth and Kent Williams. This prestige-format series teamed up Wolverine with Scott Summers’ younger brother, who had recently rejoined the X-Men. The story starts off with Logan and Alex taking a vacation in Mexico. However, it seems trouble has a way of finding Wolverine wherever he goes. In this case, terrorists have targeted the pair, hoping to use Havok’s mutant ability to power up a Russian terrorist known as Meltdown. Long story short, chaos ensues. This series has been collected a few times in trade paperback and hardcover. However, the most recent edition was released in 2003, 2o you may have better luck tracking these four issues down in a back-issue bin.