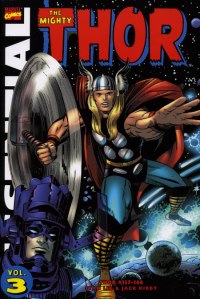 Overview: It’s time to go back to Norse Mythology 101, true believers, as we look at the third volume of the Essential Thor series. Get comfortable, because with Stan Lee and Jack Kirby telling these tales of Asgard, we are in for some incredible adventures. You will not want to put this book down

At the end of the last volume, Odin had decreed that Thor should stop his infatuation with nurse Jane Foster. A spell was cast to change Jane’s heart, and she quickly moved on to a new job and a new interest. Jane would be seen very sporadically throughout this volume and the upcoming volumes, but her story with Thor is not yet done.

Instead of Jane Foster, Odin “encourages” his son to turn his eyes upon Lady Sif, who happens to be the prettiest warrior in all of Asgard. Sif is ready to say “I do” but Thor’s heart is still heavy for the love he once had. This turn in direction is also used to start focusing more of the stories of Thor in Asgard proper, with the occasional visit to Earth.

A pair of important foes are introduced in this volume. The first is Ulik, the mightiest of the rock trolls. The trolls are always looking to expand their empire anywhere within the Nine Realms. Thankfully, Thor and his mighty hammer Mjolnir stand ready to push them back. Midway through this volume, Loki returns to confound his step-brother once more. Hiding out from his brother, a common thief known as the Wrecker breaks into Loki’s hotel room. Karnilla, the Norn Queen, casts a spell at Loki but it hit the Wrecker instead, granting him great strength and invulnerability. Definitely strong enough to go toe-to-toe with Thor.  (Years later, the Wrecker will share some of his powers with three other felons to create the Wrecking Crew.)

As the book progresses, we see Kirby’s influence on the book take control – larger panels, double-page spreads, and cosmic stories. Of course, that means another visit from Ego the Living Planet, who is at odds with Galactus, devourer of worlds. Doesn’t get much more cosmic than that, right?

What makes this Essential?: This is a must own Essential. Stan Lee and Jack Kirby hit their creative peak with the run of issues in this volume. While there are some story arcs taking place firmly on Earth (Circus of Crime, the Wrecker), we get more of Asgard and Thor’s place in the universe. Ego the Living Planet returns, and familiar faces from the pages of Fantastic Four come over for a visit, in Adam Warlock and Galactus. Kirby has moved away from the 9-panel pages to go with the larger 4-panel pages or even full page splashes, making the saga of our favorite Norse deity seem that much more grander. I say this should be a must own for the Kirby fans and/or Thor fans.

Footnotes: The Tales of Asgard stories ended in Thor #145. From issues #146 to #152, a new backup from Lee & Kirby featuring the Inhumans began, but those are not reprinted in this Essential. Finally, with Thor #153, Thor finally gets the entire issue for his continuing adventures.

If you like this volume, try:  the Thor, God of Thunder series that launched in late 2012 as part of the Marvel Now campaign. Jason Aaron helms this title, crafting incredible concepts for Thor. His approach to the majority of the stories is to tell them from three points of view from Thor’s timeline: the current Thor of today, Thor as a brash youth from a 1,000 years ago, and an elder Thor, King of Asgard. The main artist for the book is Esad Ribic, whose art reminds me of Bill Sienkiewicz, but the finished product has the grandeur of Kirby.  What I really appreciate about this title is that it has been left alone from all of the other events going on in the Marvel Universe. To date, you can read this title and not feel the need to pick up crossovers or additional miniseries. This title will be coming to an end with issue #25 later this fall, so catch this while you can, before Thor makes his (or her) next transformation. Thor, God of Thunder has been collected in hardcover and trade paperback collections and should be easy to track down.