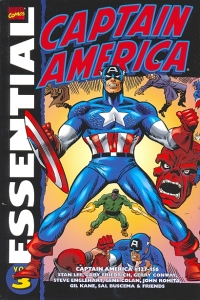 Overview: Welcome back to the continuing adventures of Captain America and the Falcon. This volume features an all-star list of comic greats, as Stan Lee and Gene Colan wrap up their long run on the book, and familiar Marvel Bullpen creators like Steve Englehart, John Romita, Sr., and Sal Buscema get their chance to take on star-spangled superhero.

Our duo continues helping out Nick Fury, Sharon Carter, and S.H.I.E.L.D. with a variety of familiar foes, such as the Red Skull, Hydra, and the Grey Gargoyle. Heroes like Spider-Man and the Avengers make cameo appearances, as New York City is the hub for all Marvel super-heroes.

Now, one of the struggles for our title character is to find something to occupy his time when he is not in costume. Sam Wilson works as a social worker in Harlem, and now has a steady girlfriend in Leila Taylor. But what can Steve Rogers do? Well, with good intentions, he joins the New York City Police Department. He works with Police Commissioner Feingold to set it up, but they agree to tell no one of Rogers’ other identity. Of course, this leads into all kinds of crazy excuses that Rogers must come up with to explain missing his shift, much to the annoyance of Rogers’ sergeant, Brian Muldoon (who bears a solid resemblance to Jack Kirby, one of Captain America’s co-creators).

The volume concludes with a face-off with the Captain America and Bucky from the 1950s. We find out that the government tried to introduce a new Captain America during the early days of the Cold War. William Burnside is an avid Captain America fan, and while researching his hero, he discovers the super soldier formula long thought lost. He undergoes plastic surgery to have his face shaped to look like Steve Rogers. Bringing in a young Jack Monroe that shares Burnside’s beliefs, the two teamed up as Captain America and Bucky. But their version of the super soldier formula causes psychotic breakdowns in the heroes, and the government is forced to put the two into suspended animation. Reanimated in the early 1970s, the 1950s Cap and Bucky come to blows with our Cap and Falcon. Our fearless heroes triumph, and the 1950s heroes are put back on ice. (In later years, Jack Monroe would return to Captain America’s side, adopting the Nomad costume identity in the 1980s. For more on Nomad, come back for Essential Captain America Vol. 4!)

What makes this Essential?: This volume really has me on the ropes. I don’t want to write a negative review about it, but I don’t know that I can write a positive review either. Given the incredible talents of the creators involved with the volume, one might expect the stories to be more epic in nature, or even more memorable. I don’t believe they were phoning it in during this era, but this is one of those books that felt like priority 1 was to just get a book out each month. This is a very good read for the Captain America fan, but I believe the casual Marvel Universe fan will find it disappointing.

Footnotes: Captain America Special #1 (1971) and #2 (1972) are reprint issues. collecting previously published stories from Tales of Suspense and Not Brand Echh. The covers for the two issues are in this volume.

If you like this volume, try: the Captain America movies from 2011 and 2014. In all fairness, this may seem like a cheat. Maybe I am struggling to find another book to recommend based on the events of these comics. But at this point, if you are reading Volume 3, you probably have also read Volumes 1 and 2, which gives you 8 years worth of Captain America stories. So you understand who the character is and how he should be portrayed. So jump over to the movies. The 2011 Captain America: The First Avenger film portrays our hero’s origin, using the story from Captain America #255, which is viewed as the definitive Captain America origin, during the Roger Stern-John Byrne run in 1980 (see Essential Captain America Vol. 7). Jump ahead to the 2014 Captain America 2: The Winter Soldier and we see Captain America working with S.H.I.E.L.D., which we have seen a lot in these Essentials. Look at the opening to Captain America #153, as Captain America comes home and finds Nick Fury sitting in the dark. That scene was later mimicked in the movie. Chris Evans visually personifies Captain America in the flesh, even more so than Robert Downey, Jr. as Iron Man. The Captain America films have done an excellent job of aligning the movie character to that of the comic character, They are worth the re-watch to appreciate how faithful they were to the comics.