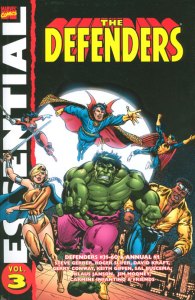 Overview: Full disclosure people – this may be a short review! When dealing with a non-team of heroes, with no official headquarters or leader or matching uniforms, what is there to talk about? But that is what makes the Defenders the most unique collection of heroes in comic books. So here we go with Essential Defenders Vol. 3.

Let’s start with the line-up. Doctor Strange, the Hulk, Valkyrie, and Nighthawk remain the core of the team. But some new faces stop by for their time with the un-team. The female version of the Soviet hero Red Guardian “joins” the team in issue #35. Hellcat wanders over from Avengers Mansion in Defenders #44, and would become a constant with the team for the next 80+ issues. The Devil-Slayer stops by for the final story-arc in this volume, but he will not be seen again until Essential Defenders Vol. 5. Finally, Clea could be considered a “member” of the team, but she always feels like Doctor Strange’s sidekick who is along for the ride just because of Stephen.

The book is overseen primarily by two writers. Steve Gerber continues his story from Essential Defenders Vol. 2, covering the first third of this book. Towards the middle of this volume, David Kraft comes on board and becomes the regular writer for the foreseeable future. He continues with the absurdists stories started by Gerber, but sprinkles in more Blue Öyster Cult jokes along the way. (Think I’m joking? Google “Defenders Blue Öyster Cult” and peruse the results.)

What makes this Essential?: Wow, where to start…… Hmmm, being quite honest, I found this a very forgettable volume. I know I read this at some point, but I am struggling to recall much of what happened in this collection. This should be a more important book, with the end of the brilliant Steve Gerber’s run on the title, and the start of the creative run by David Kraft. But I just can’t give this a thumb’s up. If you are a fan of the quirky stories of the mid-1970s, then track down a copy of this volume. But I don’t think you would be missing out on much if this is not part of your personal library.

If you like this volume, try: the second volume of The Order from Matt Fraction and Barry Kitson. Following the events of Civil War, Tony Stark was named director of S.H.I.E.L.D. One of his roll-outs to make things safer for all Americans was the 50-State Initiative, which was a plan to place a team of super-heroes in all states. For California, the team was named the Order. (Side note, the series was originally solicited as The Champions, until it was determined that Marvel did not own the trademark for The Champions any longer. Oops!) The Order was made up of 10 heroes which all loosely resembled the Greek pantheon of gods. Each character had their own feature over the 10 issues of the series, which ended when Matt Fraction felt the story had been told. This has been collected in two trade paperbacks, but I’m sure the individual issues can still be found in the back issue bins. It’s worth a read for the Kitson art and the Fraction story.

As to why I make this recommendation, I started to recommend the 2001 Defenders/Order series, but recalled that I already put it out there win my review of Essential Defenders Vol. 1. Personally, I think this Fraction/Kitson version of The Order is more interesting, so give it a look!