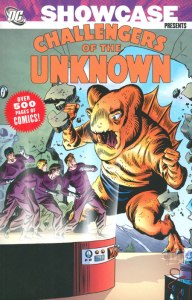 Story Continues From: Showcase Presents Challengers of the Unknown Vol. 1

Overview: A plane crash brings four men together, when they realize that they cheated death by walking away from the wreckage. Rocky Davis (Olympic wrestling champion), Prof Haley (master skin diver), Red Ryan (circus daredevil), and Ace Morgan (fearless jet pilot) team-up to form the Challengers of the Unknown, and their adventures continue in this second Showcase Presents volume.

Once again, the book follows a predictable formula from issue to issue. Most issues featured two stories – one with honorary Challenger June Robbins and one without June. Whether it was aliens from space, creatures from the Earth, or killer robots from laboratories, the Challengers stood up to anything thrown their way.

Only one new character is introduced in this volume, as the Challengers come across an alien animal that they adopt as a pet. Named Cosmo since he came from the stars, Cosmo would make the occasional appearance, including in one issue where his rightful owner came to Earth looking for his pet.

Why should these stories be Showcased?: I really want to like this book, but I just can’t. The creators had a story formula and stuck with it issue after issue after issue. The Challengers face off against threats from outer space, giant robots attacking the city, and the return of Multi-Man every four or five issues, and the story locations would just happen to require the use of their special skills. Come on, truthfully, how many stories can involve both skin-diving in the ocean AND climbing mountains? Even though the guys are living on borrowed time, at no point do we ever feel like the guys will not survive the latest adventure. It pains me to write this, but I think this is a volume that does not need to be on your bookshelf. I wish DC could skip ahead to the issues where the Challengers start interacting with other members of the DC Universe.

If you like this volume, try: the Silver Age event from DC Comics in 2000. This has never been collected, so plan on digging in some back-issue boxes to track this down. Most credit is given to Mark Waid as the overall architect of the project, but most of DC’s top talent of that time was involved in some form or fashion. The story was started with book titled simply Silver Age. Agamemno, a villain from space, enlists the help of Lex Luthor and other villains in swapping places with their heroic counterparts. The story then split off into nine one-shot books from books popular during the 1960s (Justice League of America, Challengers of the Unknown, Teen Titans, Dial H for Hero, Flash, Doom Patrol, The Brave and the Bold, Green Lantern, and Showcase). For the Silver Age: Challengers of the Unknown book, the Challengers travel to Ivy University to help Atom defeat Chronos. The Silver Age books were done to look like were released in the 1960s, complete with the checkerboard cover, an old DC Comics logo, This was a fun project to look back fondly on DC’s Silver Age of comics.

One thought on “Showcase Presents Challengers of the Unknown Vol. 2”