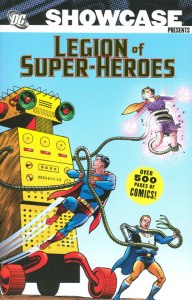 Overview: From across the vast reaches of the known galaxy, the most powerful teenagers gather together to protect the universe. With unique abilities across the members, these teenagers are united to peace and prosperity to all beings. This is the Legion of Super-Heroes. Sit back and enjoy the ride, as we have a fun set of stories in this second Showcase Presents volume.

Part of the charm of the Legion is the ever growing line-up, as new heroes are introduced to join the clubhouse – from Timber Wolf to Ferro Lad to Karate Kid to Princess Projectra. Not everyone is truly Legion material, but not to worry as the Legion of Substitute Heroes always has a spot open for them. And sometimes you let the wrong person in, as the Legion found out with the introduction of Nemesis Kid.

One of the Legion’s greatest threats to come is introduced in a rather humble beginning. The murderous living computer Computo (accidentally created by Brainiac 5) shows up, intent on killing off all life. During the course of the battle, Triplicate Girl makes the ultimate sacrifice to protect her teammates.

In terms of creators, a (then) true teenager took over the writing duties of the Legion in this volume. Legendary comic creator Jim Shooter begins his long run with the kids of the future in Adventures Comics #346. Shooter’s Legion run is often cited as one of the more influential runs with the characters. We will get more of the Shooter stories in the next Showcase volume.

Why should these stories be Showcased?: For the most part, the Silver Age stories from DC Comics do not hold up. However, with the Legion of Super-Heroes, this volume surprisingly does stand the test of time. The stories are fun adventures that can go anywhere and everywhere in the course of 15 pages. We’ve gotten past the need to re-introduce characters and their powers each month, and just get into the telling of the story. There are several key Legionnaires introduced in this volume, which makes for interesting reading to see how they began compared against how they came to be used later.

If you like this volume, try: the 2005 reboot of The Legion of Super-Heroes by Mark Waid and Barry Kitson. Over the years, the Legion has had their story rebooted numerous times. Sometimes it’s a soft continuation of where things left off, and other times it takes the Legion in a completely different direction. With this relaunch, if felt like a modern refresh of the original LSH, in terms of number of Legionnaires as well as a general positive approach to the story. From issues #16 to #36, the title was renamed as Supergirl and the Legion of Super-Heroes. With issue #37, it went back to just Legion of Super-Heroes, as Jim Shooter returned to the teenage heroes where he got his start. Personally, I would stick to the first 36 issues, which have all been collected across six trade paperbacks. That said, I see these issues in back issue bins, so it may be a fun hunt to track them down at conventions.