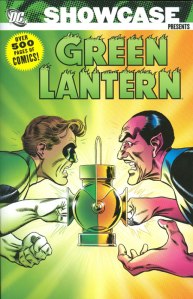 Overview: In brightest day, in blackest night, no evil shall escape my sight. Let those who worship evil’s might, beware my power, Green Lantern’s light! With that, let’s dive into Showcase Presents Green Lantern Vol. 3.

Green Lantern is an interesting title of the era, as any type of story seems reasonable with this character. From traveling to the future or to parallel universes; or roaming the vast reaches of space to battling criminals in Coast City — it all works with the Hal Jordan character. In many ways, Green Lantern is the definitive science-fiction character of the 1960s.

Having worked with him in the Justice League-Justice Society meetings, Green Lantern has a series of solo team-ups with Green Lantern of Earth-2 in this collection. Alan Scout’s ring is powered by magic, and is vulnerable to anything made of wood, which is in complete contrast to Hal Jordan’s will-powered ring that is vulnerable to anything yellow. Let’s just hope that these two do not have to face crooks armed with yellow baseball bats.

Gil Kane’s art is the true star of the show in this volume. Although Kane’s career spans 50+ years, it is his work on Green Lantern that remains among the most-memorable of his career. This volume is an excellent example of his artistic brilliance.

Why should these stories be Showcased?: To date, each volume in this line is better than the previous. At this point, the creators (John, Gil, and Gardner) have fully established the character and his world. Now, we see Green Lantern’s universe expand, with team-ups with the Flash and Zatanna, and with the introductions of Alan Scott and Guy Gardner. (John Stewart fans, be patient – his time is coming!) As with the prior volumes, Green Lantern remains one of the titles most-impacted by the lack of color in the Showcase Presents line. Thankfully, the Silver Age comics were very diligent in explaining the Green Lantern ring’s weakness to anything yellow each and every time it occurs. Anyway, I think this would be a good spot to pick up Green Lantern if you haven’t so far. In particular, this should be a must own volume for Gil Kane fans!

If you like this volume, try: the Green Lantern: Sector 2814 series of trade paperbacks from the last few years. These books collect the Green Lantern title from the 1980s – before, during, and following the events of Crisis on Infinite Earths. Hal Jordan finds that he needs to walk away from his role as defender of Sector 2814. But two men – John Stewart and Guy Gardner – step forward to take on the mantle as Green Lantern of Earth. Three volumes have been released so far, collecting the work from Len Wein, Dave Gibbons, Steve Englehart, Paul Kupperberg, Joe Staton, and others. These books are an easy way to explore some great Green Lantern Corps stories that often get overlooked.