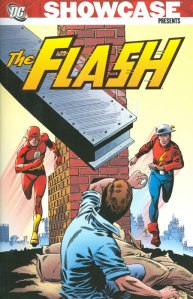 Overview: Moving like a bolt of lightning, Barry Allen protects Central City as the fastest man alive, the Flash! With one of the most intriguing rogues gallery of any hero, the Flash fights colorful foes on his Earth as well as other Earths! What, other Earths you ask? Yes, sit back and enjoy this read, as we will be crossing dimensions to other earths. Welcome to Showcase Presents The Flash Vol. 2.

Picking up where we left things off with the last collection, the Flash still has to face off each month against the likes of Captain Boomerang, Gorilla Grodd, and the Mirror Master. But lets add some more names to his growing list of foes. The Top gives the Flash someone that can fight him with similar speeds; Heat Wave serves as a counterpart (and partner) to Captain Cold; and Abra Kadabra uses future science to become a modern day magician and thief. But the Flash’s greatest threat zooms into the picture as the Reverse Flash (a.k.a. Professor Zoom), an evil doppelganger to Barry Allen. Thankfully, Barry still gets some help from the Elongated Man and Kid Flash, who is sporting a new yellow costume which is totally lost on those of us reading these in the black & white Showcase Presents editions.

But the most important comic in this volume (and perhaps the most important comic published by DC Comics since Showcase #4) is The Flash #123. Barry Allen finds out that if he vibrates his body at a certain frequency, he can cross over to a parallel earth. Instead of being in Central City, the Flash finds himself in Keystone City, home to his favorite comic book hero, the Jay Garrick Flash. Locating his idol up in a phone book, Barry arrives on the Garrick doorstep and comes face to face with the Golden Age Flash. Barry appearance encourages Jay to dust off his helmet and get back into his fighting togs, and we now have Flashs on two Earths. Jay Garrick would appear in multiple issues, including a team-up with Barry where they rescue Jay’s teammates from the Justice Society of America. Though it is not named until Justice League of America #21, this is Earth-Two, and a new continuity is born in DC Comics.

Why should these stories be Showcased?: This is a must own volume, in my humble opinion. As entertaining as the Flash stories are during this period, the historical importance of Gardner Fox re-introducing Jay Garrick and subsequently the Justice Society had a huge impact on DC Comics. Fox started developing a continuity to the stories that had been superficial at best with the publisher in years past. The work started here became the framework for uniting the various DC comics into one shared universe.

While Joan Williams had been the steady girlfriend of Jay Garrick in the 1940s and 1950s, it was their appearance in The Flash #123 where we learned that the two had finally gotten married and settled down into a nice house in the suburbs.

If you like this volume, try: tracking down the Crisis on Multiple Earths: The Team-Ups trade paperbacks from 2005 and 2007. With the success of the Jay Garrick Flash appearing with Barry Allen, the DC Universe books from Gardner Fox started teaming up the Silver Age characters with their Golden Age counterparts. Alan Scott appeared with Hal Jordan in the pages of Green Lantern, and Al Pratt teamed with Ray Palmer in The Atom. Other books featured Justice Society characters, such as Doctor Fate & Hourman or Starman & Black Canary teaming up in the pages of The Brave and the Bold before it became a Batman team-up title. While some of these issues can be found in other Showcase Presents Volumes, these two trades are a handy resource to put all of the these issues in two collections.