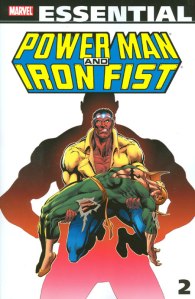 Overview: With apologies to Tony Kornheiser, the Heroes for Hire are back for more cash. The bills don’t pay themselves, so Luke Cage and Danny Rand make their services available to clients of all types. Unfortunately, a lot of the times, they end up doing pro bono work, as is the nature of most superheroes.

One client that can afford to pay the Heroes for Hire is the law firm of Nelson & Murdock. This collection kicks off with a crossover with Daredevil during the Frank Miller era. Matt Murdock has a client with papers connecting a mayoral candidate with the Kingpin. So Murdock arranges to have Daredevil protect the client. But Matt’s partner, Foggy Nelson, is worried about Matt’s safety. So Foggy retains the Heroes for Hire to protect his law partner. You can probably imagine what happens next? A lot of confusion, the heroes fight, and the Kingpin gets away.

The rest of the book remains a self-contained storyline. The issues are generally one-and-done tales, but there is an underlying story that slowly builds up to a climax with issue #100. While some references are made to other events in the Marvel Universe, the world of Luke Cage and Danny Rand does not cross over with a lot of other heroes. Fortunately, the cast of supporting characters help round out the stories, so you don’t need a lot of other heroes to keep the story moving.

What makes this Essential?: Is this truly essential? Probably not. But it is a solid read focusing on a core group of characters. With the exception of the Daredevil crossover at the start of the book, this collection does not cross over with other titles in the Marvel Universe. You don’t need to read a dozen other titles to understand what is going on with the characters.

One highlight to take away from this book is that it features the Marvel debut of Kurt Busiek as a writer. Busiek has become one of the best comic book storytellers of our generation. With titles like Marvels, Kingdom Come, and Astro City on his resume, he is a master of the superhero story. And it all started in the pages of Power Man & Iron Fist. Let’s be honest, it’s not his best work. But to his credit, Busiek did his research and knew these heroes. He brought back characters from Power Man and Iron Fist’s past when they were solo features in their own books.

Footnotes: Sadly, Marvel canceled the Essential line before a third volume could be released for this line. Power Man and Iron Fist finished with issue #125, which means that volume 3 could have contained the final 25 issues, plus any crossovers.

If you like this volume, try: the Thunderbolts from Marvel Comics. Launched following the events of Onslaught, which saw the Fantastic Four and the Avengers disappear from Earth, there was a need for a new superhero team to protect the people. Enter the Thunderbolts, a new team of heroes led by Citizen V. But the Thunderbolts have a secret – they are actually the Masters of Evil posing as heroes: Citizen V is Baron Zemo, Meteorite is Moonstone, Atlas is Goliath, Mach-1 is Beetle, Techno is Fixer, and Songbird is Screaming Mimi. Their secret was revealed at the end of issue #1, and it came as a complete shock to everyone at the time. The series was created by Kurt Busiek and Mark Bagley, and the two worked on the title for the first three years of its run. The early issues have been collected in three Thunderbolts Classic trade paperbacks, which were released in 2011 and 2012.

One thought on “Essential Power Man and Iron Fist Vol. 2”