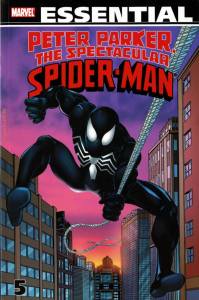 Overview: Once again, we swing into the crazy life of Peter Parker, the Spectacular Spider-Man. We see Peter struggling with his relationship with the Black Cat, who only has feelings for him when he is in costume. There is the question of the Black Cat’s new powers – how she came to get them, and why they are driving her away from her Spider. All of this gets wrapped up in the anniversary issue #100, with an all-out battle between Spider-Man, the Black Cat, the Kingpin, and the Spot. Yes, the Spot!

After that, we are given a lot of one-and-done stories to fill out this Essential. The title has a rotating creative team until Peter David and Rich Buckler take control of the book, creating some memorable storylines, detailed below. A benefit to these issues were some amazing covers by John Byrne for issues #101 and #102.

There is one issue towards the end, #111, which was a Secret Wars II crossover. Spider-Man’s adversary, the Puma, decides that it is his life purpose to destroy the Beyonder, and Peter finds himself with the moral dilemma of saving someone like the Beyonder.

What makes this Essential?: This book could be divided into two halves, one labeled Before Peter David, and the other Written By Peter David. The Before Peter David stories wrap up the ongoing storylines from Essential Peter Parker, the Spectacular Spider-Man Vol. 4, featuring the long-running story between Spider-Man, the Black Cat, and the Kingpin. The stories here are very similar in tone and quality to the other stories of this time (Amazing Spider-Man, Marvel Team-Up).

There is a marked shift in tone when Peter David comes on board. These stories are his earliest work at Marvel, and they quickly show what an excellent writer he is of comics. The characters feel more real, more alive under David’s guidance. He shocked readers with the killing of long-time supporting character Jean DeWolff, not just proclaiming it on the first cover of the storyline, but with her dead body on page 3 of the story, giving no one the chance to say good-bye. For the work that David showed here, it is worthy of picking up.

Footnotes: Peter David would bring back the Sin-Eater in a second storyline, which ran in The Spectacular Spider-Man #134 (January 1988) to #136 (March 1988). These three issues, along with the original four-issue storyline, were collected in a Marvel Premiere edition, Spider-Man: The Death of Jean DeWolff.

If you like this volume, try: Spider-Man 2099 This was one of the first four titles in the Marvel 2099 line launched in 1992. Originally conceived as a Marvel: The World of Tomorrow project by Stan Lee and John Byrne, the concept eventually morphed into the 2099 line. The Spider-Man title ran for 46 issues, plus two specials, with almost all of the issues written by Peter David. In this story-arc, Miguel O’Hara is trying to recreate the abilities of Spider-Man when a freak accident causes half of his DNA to be over-written by the DNA code of a spider. There have been two trade paperbacks collecting the first year of the title, but the entire series is worth tracking down in the back issue bins.