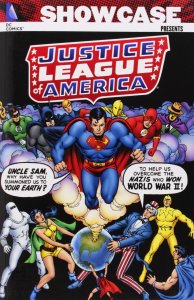 Overview: The Justice Leauge is back in their sixth (and sadly last) Showcase Presents volume. The run goes out with a bang, as we get multiple JLA-JSA team-ups, new character introductions, and pivotal moments in DC history.

This volume gives us the second appearance ever of John Stewart as Green Lantern. Hal Jordan was out of action (he slipped on the soap in the shower and knocked himself out) so the ring went to Stewart to serve in his place. It would be three more years before we see Steward in action again. Also making his first appearance in this volume was Golden Eagle, who would go on to become a member of Teen Titans West.

We get introduced to the villain known as Libra, who’s gimmick is to steal half of a hero’s powers. After his initial appearance here, he was not used again until he came one of the main bad guys in Final Crisis in 2008.

While we don’t get any new members in this collection, Red Tornado does modify his appearance into his more traditional look with the stripes. Getting away from the more robotic look was the first step on his journey to becoming more human. And the volume’s most memorable moment came not in battle but with a wedding between the long-time friend of the League Adam Strange and his beloved Alanna.

Why should these stories be Showcased?: This may be my favorite volume in the series, but I will also admit I am biased to these stories. These are some of the first comics I ever read, and Dick Dillin has been my definitive JLA artist for years. The writing duties seem to rotate around between Bates, Maggin, and Conway, but it works here. The stories take on a narrative quality, encouraging the reader to pick up the title each month.

Footnotes: Justice League of America #110 to #116 were 100-page books published bi-monthly. Each issue would feature a new story, a reprint of a prior JLA story, and a reprint of a Golden Age story from a Justice Society member. Only the new stories are included in this book.

If you like this volume, try: the Elseworlds story Kingdom Come by Mark Waid and Alex Ross. This story presented a future look at DC Universe, where the characters have aged and the children have taken over roles from their parents. A new generation of heroes has developed, but they don’t hold the same moral views as the prior generation of heroes. So the older heroes, such as Superman, Wonder Woman, and Batman, must don their costumes again to bring the heroes in line as well as stop yet another scheme from Lex Luthor. This is a brilliant story that almost demands multiple readings to pick up on everything. Heck, you need a second or third reading just to catch all of the Easter Eggs that Ross has left hidden in the backgrounds of every panel. If you have the chance, pick this up as an Absolute that includes the notes detailing who’s who in every panel.

One thought on “Showcase Presents Justice League of America Vol. 6”