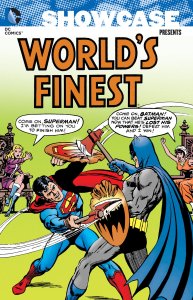 Overview: It’s interesting to compare and contrast Superman and Batman. They often get portrayed as total opposites – one shining brightly in the light of the sun, the other hidden in the shadows of the night. One who has been given powers to rival that of a god, the other just a mortal man who pushes himself to the limits of human performance. But these guys are still so similar, they could be twin brothers from different mothers (both named Martha). They’re orphans that would give up everything to have one more moment with their parents. They both strive to make the world better in their own ways. These are two of the world’s finest heroes, and this is Showcase Presents World’s Finest Vol. 4.

As with the previous volumes, these tend to run as one-and-done stories, with little to no continuity running between issues. We do get a shift in the narrative of the stories as we transition into the Silver Age. Writer Denny O’Neil brings a new approach to the storytelling, mirroring his work in Justice League of America and Batman. The art steps up a notch, too, as artists like Dick Dillin and Ross Andru create a more life-like look at Superman and Batman.

We still get plenty of cameos from all corners of the DC Universe. Whether it’s employees of the Daily Planet or residents of stately Wayne Manor, this title welcomes everyone in. We get multiple appearances by the classic villains such as Luthor and Joker, which is really the reason why we keep reading these stories, truth be told! The one new character introduced is Supernova, a new partner for Superman when Batman decides to work with Green Arrow. Supernova as a character name will surface again over the years, most recently with Booster Gold.

Why should these stories be Showcased?: There are certain titles from both DC and Marvel that should be no-brainer must-own collections in your library. Obviously, the various team-up titles come to mind first, and is it a coincidence that the two DC team-up titles feature Batman and Superman? So obviously you want to include in your collection the team-ups between Batman AND Superman.

The stories in this collection mark the turn from the Silver Age to the Bronze Age. Denny O’Neil and friends bring a more sophisticated approach to the story-telling. We even get a few Superman team-ups sans Batman, including one of the earliest races against the Flash. This is a must-own collection, and probably the best of the four World’s Finest collections.

Footnotes: The stories from World’s Finest Comics #195 and #200 were also reprinted in Showcase Presents Robin Vol. 1.

If you like this volume, try: the Worlds’ Finest series that was part of DC’s New 52 line. Overseen by writer Paul Levitz, Worlds’ Finest (and note the placement of the apostrophe!) tells the tale of Power Girl and Huntress traveling from their home, Earth-2, over to Earth-1 and setting up residence. Stranded from their family, friends, and finances, the costumed heroines must find their way in the new world. This is a great spin on the Superman/Batman dynamic, highlighted by the incredible art from the likes of Kevin Nowlan, George Perez, Scott Kollins, and more. This series is readily available in trade paperbacks, and many of the back issues can still be found in the bins.