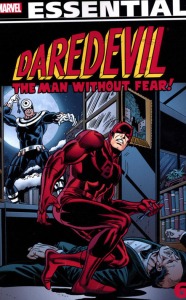 Overview: By now, I think we all know the Daredevil story. Blinded as a youth, Matt Murdock’s other senses have been heightened, allowing him to do spectacular feats beyond that of a normal man. Whether fighting crime on the streets at night or defending clients in court during the day, he is the Man Without Fear – Daredevil! This is Essential Daredevil Vol. 6.

Now at this point with the collection, Daredevil has been in business for over 10 years. Maybe it’s time for a change, to shake things up for the characters. For starters, let’s get the law firm of Nelson & Murdock out of their fancy offices. Instead, we are going to have them open up a storefront legal clinic in the middle of Hell’s Kitchen, where anyone can walk in off the street to discuss their legal problems. Let’s also introduce a new girlfriend, Heather Glenn, for Matt. A free spirit that makes you question what color the sky is in her world. (Given that this is a black & white collection, the answer should be white, but you never quite know how she might answer that question.) But just when things are getting comfortable between Heather and Matt, who should return but former romantic interest and secretary Karen Page.

Maybe we can add some new faces to the rogues’ gallery? In shoots Torpedo – but is he a hero or a villain. Or both?Then there is the new assassin known as Bullseye. He never misses regardless what the weapon is in his hands. But fans like the old foes too, so let’s bring in the likes of the Owl, Cobra, and Mr. Hyde. And being the in the Marvel Universe, you know you will have to cross paths with some other heroes, such as Iron Man, Black Panther, Namor, and Ghost Rider.

But Daredevil still shines brightest when he is a hero for the common man. Stopping a runaway bus, finding a lost boy in the big city, dealing with crooked cops, and the other challenges that come up from time to time. Going toe-to-toe with the villain of the month may sell comics, but protecting his city defines the man.

What makes this Essential?: I’ve got mixed opinions for this collection. Part of me says this is essential simply for the character introductions. Heather Glenn would be a long-time romantic interest for Matt. The Torpedo was a C-List hero but became a key part of the ROM book. District Attorney Blake Tower would become a fixture in many Marvel books, such as Amazing Spider-Man. Bullseye would become one of the most important Daredevil villains of all time, especially given the events during the Frank Miller run.

But…. these stories just seem very average. Marv Wolfman writes the majority of the stories in this collection, but I don’t feel like this is his best work. This was doing the era when Wolfman was also serving as Marvel’s Editor-in-Chief, so it makes sense that this title may not have had his full attention. I want this to be a stronger title, given the list of creators attached to these issues.

If you like this volume, try: Brian Michael Bendis’ legendary run on Daredevil in the early 2000s. I’ve previously recommended the Miller run, the Kevin Smith run, and the Mark Waid run with the Man Without Fear. It makes sense to cover the Bendis run, as he takes Matt Murdock and friends in a whole new direction. Bendis really makes this a psychological examination of what makes the hero, dragging him down to his lowest point ever. The Kingpin returns as the main protagonist for Daredevil, as well as the Owl and Bullseye. The highlight of the run is Matt Murdock being outed as Daredevil and forced to defend his name in court in a desperate attempt to maintain the dual identities. This series has been collected multiple times in trade paperbacks, hardcovers, and omnibus editions, so it should be easy to track down.