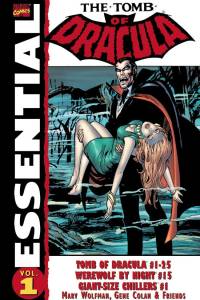 Overview: In the early 1970s, the Comics Code Authority started relaxing its standards, opening the doors for comic book publishers to get back into the business of publishing horror titles. Having already introduced Morbius as the “Living Vampire” in the pages of Amazing Spider-Man, Marvel was ready to get back into the monster business. First up was the king of the vampires with The Tomb of Dracula.

Perhaps as an indication of the madcap rush to get the title to press as quickly as possible, Tomb of Dracula went through a long list of writers over the first six issues. Gerry Conway is credited with writing the first two issues, but the bulk of #1 was actually written by Roy Thomas and Stan Lee. Conway left after the second issue because of better writing opportunities, and Archie Goodwin took over, but only for issues #3 and #4. He was followed by Gardner Fox, who wrote issues #5 and #6. Fox was relieved of his duties on the title, and Marv Wolfman took over. It took Wolfman a few issues to get comfortable with the title character and the supporting cast introduced by the previous five writers. But once he does find his footing, the series picks up and becomes a hard book to put down.

What does remain constant is the art duties of Gene Colan, who handles all of the pencilings for the issues in this volume (as well as this series). Colan’s art is just a breath-taking as his run on Daredevil, just with less spandex.

For the story itself, after a hundred years of a stake-induced slumber, Count Dracula is revived and begins his quest to reclaim his spot in a changing world. But Dracula’s return to action does not go unnoticed, and a group of would-be vampire hunters is soon on his trail:

Outside of a crossover with the Werewolf, there is very little about this book that ties it into the Marvel Universe proper. In future volumes, we will see appearances by Doctor Strange and Brother Voodoo, but in general, this is not a title that you have to read a lot of the other Marvel titles in order to understand. Conversely, characters like Blade and Hannibal King will become more prominent in other titles, with Blade actually crossing the break-out success point in the 1990s to warrant his own series, a trilogy of movies, and a syndicated television show.

What makes this Essential?: Once Wolfman takes over, I really liked the book, which came as a great surprise to me. I only picked up this book a few years ago because I found it for a good price on eBay, and the collector mentality in me is obsessing to get all of the Essentials. I’ve never been a big fan of the monster concepts, either in the original novels, the classic films, or these legendary comics. So, for now, at least, I am hooked on this concept, this presentation. I should have known that with my great love for Gene Colan’s work, I should have picked this book up earlier! I do think that the black-and-white format works better for this title, even though I know it was presented in color with it was first published. I like that this story feels timeless, in that this same story could be told today (albeit with slight differences such as replacing cord phones with cell phones) and still be just as effective.

Footnotes: Werewolf By Night #15 and Tomb of Dracula #18 are also reprinted in Essential Werewolf by Night Vol. 1.

The entire 70-issue run of The Tomb of Dracula was penciled by Gene Colan, who used the image of actor Jack Palance as his model for Dracula.

If you like this volume, try: tracking down a copy of The Curse of Dracula, a three-issue mini-series from Dark Horse Comics in 1998. This series reunited Marv Wolfman and Gene Colan on the Dracula character, but it is not officially tied to their work at Marvel with the character. Jonathan Van Helsing leads a team of vampire hunters to the fog-covered streets of San Francisco to help solve a series of mysterious murders. It was reprinted as both a hardcover and a trade paperback, but this might be a series that is easier to find in the back-issue bin.

Overview: Welcome back to more marvelous debuts of characters from the horror-themed titles of the 1970s. This volume features the first appearances of six characters of varying degrees of success.

What makes this Essential?: This is a book that can go either way — it’s a must-own book or it’s a do not own book. It’s all dependent on your personal tastes. I found that the Living Mummy and the Brother Voodoo stories worked the best, as we were given multiple issues to really dive into the characters. The other four characters each get 3-5 issues, which in most cases is not enough to really get a solid or favorable position on the character.

Personally, I might have preferred seeing more established Marvel Universe characters in this volume. For example, Greer Nelson debuted in the pages of The Cat in 1972. In 1974, she became Tigra in Giant-Size Creatures #1, followed up by a run in Marvel Chillers. She would later have stints in Fantastic Four and The Avengers (see the later Essential volumes of those titles), and has remained a fairly active character in the Marvel Universe since her introduction. This would have been a perfect showcase (pardon the use) for a female character, in a volume that is very male-centric to begin with.

If you like this volume, try: the 1980s Elementals series from Comico. The idea of characters with powers representing the basic elements is nothing new in comics. The argument could be made that the Fantastic Four is the best representation of this concept. In the Living Mummy stories in this collection, we see an actual team of adversaries called the Elementals. Over at DC Comics, a team of Elementals was introduced (but never used again) in the pages of Super Friends – see Showcase Presents Super Friends Vol. 1. But the greatest use of the concept came in 1984 at Comico, when Elementals #1 hit the comic book racks. The four characters that would comprise the Elementals (Vortex, Morningstar, Fathom, and Monolith) actually made their debut in the Justice Machine Annual #1 from 1983.  The basic set-up for Elementals is that the four element spirits find physical hosts (who have each recently died in that element) to help bring balance back to the universe due to the actions of the evil sorcerer Lord Saker. The book was written and drawn by Bill Willingham, many years before he became the grand storyteller of the Fables series. This is a really great series that sadly is not easily available today. Comico went through ownership changes and bankruptcy courts, and these characters have remained in limbo since the late 1990s. Comico released a trade paperback in 1988 collecting the initial story arc, but again, that is more than 25 years ago and its no longer in print. You might have to go to eBay or a really good back issue dealer to find these comics, but it’s well worth the hunt.

Overview: Are you ready for something different? If so, then dive into this volume as we follow the adventures of the offspring of Satan.

First up is Daimon Hellstrom, a learned scholar who specializes in the occult. However, when the cases get dangerous, he changes into his Son of Satan persona. Armed with a trident and possessing the power of the Darksoul, the Son of Satan fights many of the lesser demons of Hell looking to gain favor with Daimon’s father. Daimon’s story ran through Marvel Spotlight before he graduated into his own short-lived title.

Also debuting at the same time is Daimon’s sister, Satana. The two siblings were separated as kids following their mother’s death and raised completely different. Satana embraces her heritage more than her brother. Satana feeds on the souls of men, which she absorbs by kissing them. When she finishes, the man collapses dead and a butterfly is released. Satana’s story jumped around between various Marvel/Warren magazines before it comes to an end in the pages of Marvel Team-Up. Is this the end of Satana? Time will tell….

What makes this Essential?: I’ve got mixed opinions on this book. Most Essentials follow a character through the run of their book, and will include any additional appearances in other titles. So while this is titled the Essential Marvel Horror Vol. 1, it could better be named as Essential Son of Satan & Satana. But I don’t know if that volume would have sold. So, for following the adventures of these two characters, this is a serviceable volume if you are fans of the characters. I found the Satana stories more interesting, being a mix of illustrated tales and prose pieces.

But personally, after seeing the Satana stories from Vampire Tales and Haunt of Horror, I would much rather see Essential Marvel Horror collect the entire run of those magazines in a volume. There are a lot of Marvel/Warren magazines that have not been reprinted, and the Essential line would be the perfect place to present them again.

If you like this volume, try: the Rachel Rising series from Terry Moore. For me, the highlight of this entire volume is ‘The Kiss of Death’ story from Vampire Tales #3. Gerry Conway’s script is good, but the artwork by Esteban Maroto steals the show. This story is breathtaking and worth the price of the Essential just to read this story. For those unfamiliar with his work, Maroto is a Spanish artist that did a lot of work for the various horror magazines of the 1970s. He helped design the metal bikini for Red Sonja with her debut. He also did an Amethyst mini-series for DC and a story in an X-Men: Unlimited issue for Marvel. Maroto’s female forms are exquisite, ranking up there for me with the likes of George Perez, Phil Jiminez, Adam Hughes, and Terry Moore. Since the early days of Moore’s Strangers in Paradise series, his female characters have jumped off the page, laughing and loving and living. In 2012, Moore launched his first horror series with Rachel Rising, about a young woman waking up one morning dead, but she remembers who killed her. Over the series, other friends die but remain alive; deals with the devil are made, and a mystery dating back hundreds of years is slowly revealed. This is some of Moore’s best work ever, and you are missing out if you’re not picking it up every six weeks. The early issues are collected in trade paperbacks to bring you up to speed with one of the best (and creepiest) books on the market today.