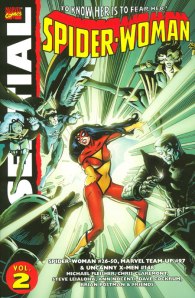 Overview: The adventures of Jessica Drew continue in this second volume of Essential Spider-Woman. We seen Spider-Woman working as a bounty hunter in Los Angeles in partnership with her friend Scotty McDowell. Their friendship and working relationship is drifting apart, leading to both of them going their separate ways.  That path leads Jessica to move to San Francisco, where she becomes roommates with Lindsey McCabe, ²and Jessica sets up office as a private investigator.

Spider-Woman fights numerous unmemorable villains from issue to issue. The highlight of these is an encounter against the Juggernaut and Black Tom Cassidy. This gives Chris Claremont to bring in his X-Men for a crossover appearance. Spider-Woman returns the favor by making a guest appearance in Uncanny X-Men #148.

Throughout the series, Spider-Woman has been tormented by Morgana le Fay, who wants Jessica’s soul. This comes to a climatic conclusion with issue #50. Jessica fights for her soul in the astral plane, and finds a way to defeat her with the aide of Magnus. However, Jessica is surprised to find that her body has died while her spirit was outside of it. Magnus casts a spell to make everyone that has known Jessica to forget her, so that no one has to mourn for her. The series ends with the spirits of Magnus and Jessica Drew fading off into limbo.

What makes this Essential?: Well, quite honestly, I don’t know that this is truly essential. The Spider-Woman shown here from the early 1980s is far different from the Spider-Woman shown in comics in the 2000s. I’m looking for a positive on why this should be read, but I am not coming up with one. Conversely, I’m not finding a negative as to why this should not be read. If you want to consider this an essential, that’s fine, but it should probably be low on your list.

If you like this volume, try: tracking down Avengers #240 and #241 from 1984. While Roger Stern was the regular writer of Avengers at this time, Ann Nocenti co-wrote these two issues to tie up the final plot threads left dangling at the end of the Spider-Woman series. We discover that Jessica’s friends discovered her body in time to revive it, but she is still in a coma in a San Francisco hospital. The Avengers enlist the help of Dr. Strange, who leads the Avengers into the astral realm to battle Morgana Le Fay for the soul of Jessica Drew. Not to spoil the ending, but the heroes win out, and Jessica Drew awakens, ready to start a new life. If I was running Marvel, I probably would have pushed to include these two issues in this Essential volume, since they do help wrap up the final storyline. These issues have not been collected yet, so search for them in a back issue bin at your local comic store. 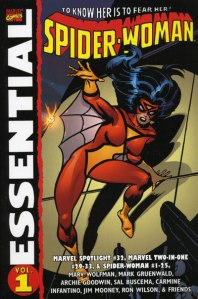 Overview:  Living with her parents near Wundagore Mountain, young Jessica Drew becomes deathly ill from uranium poisoning. Jessica’s father injects her with an experimental serum based on irradiated spiders’ blood to save her life, but it puts her into suspended animation while her body heals. When she comes out of it as a young adult, she finds that she has powers similar to that of a spider – climbing walls, gliding on wind currents, and a venom blast. Recruited by Hydra, Jessica Drew takes on the name of Spider-Woman and is assigned a task to kill Nick Fury. So begins the adventures of Marvel’s newest superhero!

Jessica eventually flips sides, and works for S.H.I.E.L.D. as a double agent, spying on Hydra. She gets involved in a convoluted adventure with the Thing in Marvel Two-In-One, which lead into Jessica getting her own title and returning back to the United States.

Early on in the series, Spider-Woman battles an assortment of macabre characters, such as Magnus, Morgana le Fay, and the Brothers Grimm. She develops a friendship with actress Lindsey McCabe, who would become a long-time companion even after this title ended. She also opens an investigation agency with Scotty McDowell, who does the office work from his wheelchair while Jessica does the leg work on the streets.

What makes this Essential?: My personal opinion is that this collection (and character) is a train wreck. “Spider-Woman” was created solely to protect Marvel from having an another comic book publisher creating a character with that name, by trying to sponge off of the Spider-Man property. (To protect other possible trademark infringement, other debuts in this era also include She-Hulk and Ms. Marvel.) Originally, Spider-Woman was to be a spider that had been evolved into a human – thankfully that origin went away. Despite the namesake, writers Marv Wolfman and Mark Gruenwald avoided using Spider-Man in a cameo appearance, although he finally did show up in issue #20 towards the end of Gruenwald’s run. Even though she wore a costume, this title felt more like a horror or monster book, along with the lines of Werewolf By Night or Tomb of Dracula. Despite all of these handicaps, the Spider-Woman character has survived and flourished over the years, most notably under the direction of Brian Michael Bendis in the pages of New Avengers.  If you are a big fan of Jessica Drew, consider getting this just to understand how far the character has come since she first debuted.

If you like this volume, try: reading the Alias series from Brian Michael Bendis and Michael Gaydos. Jessica Jones is a superhero turned private investigator. She went to high school with Peter Parker. As the superhero Jewel, she was once an Avenger. Now, life is just scraping by from one assignment to the next. Her circle of friends includes Luke Cage, Carol Danvers, and Jessica Drew. This series was part of the Marvel MAX line, which was designed to tell R-rated stories set within the Marvel Universe. The series ran for 28 issues and was replaced by the short-lived title The Pulse, which really was Alias without the MAX heading. Alias has been collected in multiple formats, including an Omnibus. Jessica Jones is one of the featured characters in the Marvel/Netflix deal, so catch up on Alias now.