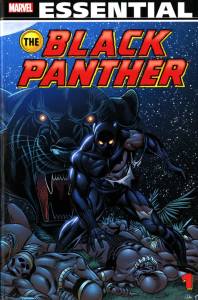 Overview: Coming in on a 12:30 flight, we are taking a journey to the land of Wakanda on the African continent. A country built on Vibranium, a rare and powerful element that makes this small country one of the most important ones in all of the world, which in turn brings a lot of threats and dangers to the land. This is Essential Black Panther!

For years, we’ve known of the Black Panther as a supporting character. First introduced in the pages of Fantastic Four, he was a member of the Avengers for many years. Now, we see Black Panther return home, to handle the responsibilities of leading his country.

This collection is broken up nicely into two distinct runs. In the first run, writer Don McGregor, with art from the likes of Rich Buckler and Billy Graham, gives us two great storylines that show the range of the Black Panther character. The Panther’s Rage storyline has Black Panther fighting off a challenge to his throne by Erik Killmonger. The story runs across Africa, from deserts to jungles to waterfalls and caves, Black Panther stands up to the challenges of Killmonger and Venomm to protect his land.

The second storyline from McGregor has T’Challa returning to the United States with his girlfriend Monica Lynne, only to encounter the racist threats of the Ku Klux Klan. This is a powerful story arc on a subject that doesn’t get enough coverage in comics.

The second run in this collection comes to us from the mind of Jack Kirby, so sit back and enjoy the run. During his return to Marvel in the mid-1970s, Kirby was given complete control over his projects and went balls-to-the-wall with everything he did, with titles like Captain America, The Eternals, 2001, and Devil Dinosaur. But my favorite run in this period is his work on Black Panther. He takes Black Panther on a wild journey, chasing after King Solomon’s Frog that can travel through time or bringing in his cousins to protect Wakanda from the radioactive Jakarra. These may not be the greatest Black Panther stories, but they have to be the most fun Black Panther stories.

What makes this Essential?: These are some must-read stories for the Black Panther character, but I don’t know that this is the best collection to read these stories. I would have liked to have seen the Black Panther’s first appearance reprinted in this collection, or even his origin story. You can track those down in other Essentials, but it would have been nice to have them in this book, too. The final five issues of the 1977 run (including Jack Kirby’s final three issues!) are not included here. You cannot even find them in an Essential. I truly believe that Black Panther should have been done in two Essential volumes, to include all of these missing issues.

My other issue is the printing process for this collection. With a character that where’s a black costume, reprinting the story in black and white makes these stories hard to read at times. This is one of those rare times when I wished I had read all of these stories in a color edition.

With all of that said, I do really like these stories. This was the first time that Black Panther got to stand on his own as the lead character in a title or in his own self-titled book. The current success of the character would not be possible without these stories laying the groundwork to establish T’Challa as an A-list hero.

If you like this volume, try: any of the following choices. There are so many great options when it comes to tales involving the Black Panther. 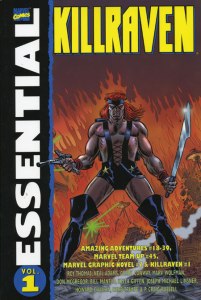 Overview: You remember the Martian invasion back in 2001, right? The Martians came to Earth, destroyed governments, and left the planet as a human-breeding farm to feed the growing Martian-population. Don’t worry though, in just two short years, a red-headed human will escape the slave pits to lead a revolution, to rid the Earth of Martians and reclaim the planet for the humans. Welcome to the future (or alternate) world of Killraven!

In the early 1970s, Roy Thomas and Neal Adams collaborated to find a way to work H.G. Wells classic story, The War of the Worlds, into comic book form. Rather than do a direct adaption of the original story, they instead took the situation from the book and told a story based on the Martians successfully taking over the Earth. What would the Martians do once they occupied the Earth, and how would the humans respond. From there, the character of Killraven was developed. Originally designed to be a next generation version of Doc Savage, Killraven borrows heavily from other concepts – from Conan the Barbarian to Flash Gordon and more.

Early on in the story, Killraven breaks free from the slave pits, and sets off on a mission to track down his long-lost brother. Along this journey, Killraven builds a band of followers that all look to him for leadership. Unfortunately, the Martians kept getting in the way of Killraven’s band on their haphazard travels around the country, and eventually the goal becomes more to rid the world of the Martians. (And yes, it if’s Marvel in the 1970s, you can fully expect a cameo crossover with Spider-Man along the way!)

Eventually, the band of freedom fighters find themselves in Florida at the Martian headquarters, and their Killraven finds his brother, who has betrayed his brethren and is working with the Martians directly. The rebels destroy the Martian base, crippling their hold on the humans, and Killraven parts ways with his brother in a final battle. But the battle is not over yet, and Killraven moves on to the next untold adventure to save the Earth.

What makes this Essential?: This is an interesting story, in particular when we get the creative team of Don McGregor and P. Craig Russell. Those two were definitely in sync with the direction and the flow of the book. These are some of the most creative comics that came out of this era, when compared against many of the other Essential volumes from this era that I have read. BUT… in the grand scheme of the Marvel Universe, this seems to be an isolated aspect that doesn’t get revisited much. With the bulk of these stories taking place in the (then) future, and it later being determined that it was an alternate Earth’s future that faced the Martian invasion, there hasn’t been the demand/need to go back to this story. Killraven is occasionally brought in for the rare cameo appearance in other Marvel Universe titles, but I feel that is more to keep a copyright in place rather than to continue Killraven’s story. I think this is an important volume to have for the sci-fi/fantasy fan, but I can think of multiple Marvel Universe characters that probably deserved an Essential volume ahead of Killraven.

If you like this volume, try: Weirdworld, the five-issue miniseries from Marvel earlier this year that tied in with the 2015 Secret Wars event. Written by Jason Aaron with art by Mike Del Mundo, this fantasy epic touched on so many familiar elements of the Marvel Universe from the 1970s and 1980s. Arkon, a long-time foe for the Avengers and the Fantastic Four, is struggling to find his home, Polemachus. Unfortunately, he is stuck traveling through the Weirdworld zone of Battleworld in order to find his home. Along the way, he encounters the likes of Warbow, Skull the Slayer, Jennifer Kale, and others. At the same time, he finds that Morgana Le Fay is working in the background to stop him. Del Mundo’s art is spectacular in this series, giving it a dream-like appearance from page to page. This has been one of my favorite comics from 2015, and I hope you got a chance to read it too. 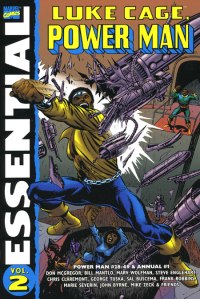 Overview: The Hero for Hire, Luke Cage, is back for more cash in the newest Essential volume. Let’s be honest here, being a super-hero is expensive work. Not all heroes get a stipend from the Stark Foundation or live off of the royalties from the patent for unstable molecules to be used to make uniforms. Paying rent, buying food, and replacing those yellow silk shirts torn up in battle adds up quick for a struggling hero. Of course, you have to charge a fee for your services.

Luke Cage remains a hero of the people, working out of his office above a Times Square movie theater. He fights a lot of run of the mill one-and-done villains created specifically for this title. Outside of a fight against Moses Magnum in Power Man Annual #1, his villains do not make many, if any, appearances in any other books.

As the book comes to an end, Cage finds a lot of familiar faces from his past coming back to confront him. Crossing paths with the kung-fu hero, Iron Fist, Luke Cage is finally able to clear his name, making him a free man for the first time in many years. The two agree that working together benefits both of them, and a new super-hero duo is formed. But like any other story, that is a tale to be continued….

What makes this Essential?: This book is a step up from the first volume, but not nearly as good as it will become with Essential Power Man & Iron Fist Vol. 1, The second half of the book, under the direction of first Marv Wolfman and then Chris Claremont, starts to finally find it’s place focusing on an urban hero and not just an urban black hero. The art is serviceable, but not memorable by any means. If you are a fan of Luke Cage, this is worth the read. But I would not consider it essential to have in your collection.

Footnotes: Power Man #36 is a reprint of a story originally featured in Hero for Hire #12. The new cover for #36 is included in this Essential.

Giant-Size Power Man #1 (1975) is a reprint collection of stories originally featured in Hero for Hire #14 to #16. The cover is included in this Essential.

If you like this volume, try: the New Avengers books from the last decade. When Brian Michael Bendis relaunched the Avengers in the mid-2000s, he brought in a new line-up (Luke Cage, Spider-Woman, Spider-Man, Wolverine, and others) to fill the spots around Captain America and Iron Man. At that time, Luke Cage had become a peripheral character in the Marvel Universe, brought to an event to help fill out the background of a large super-hero crowd scene. Over the run of the New Avengers title, Luke Cage became one of the core members of this line-up, to a point where he became the team leader. New Avengers ruffled the feathers of a lot of long-time Avengers readers, but the non-traditional line-up allowed for some interesting storylines. This has been collected multiple times in trade paperbacks, hardcovers, and omnibus editions, so it should be easy to find these stories.