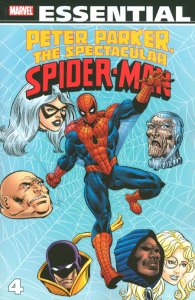 Overview: With the last volume, I criticized Marvel for ending that book in the middle of the Doctor Octopus-Owl gang war. As disappointing as it was to finish Volume 3 that way, it also means that this volume starts off right in the middle of the action. So let’s get into the stories!

In case you are unfamiliar with this title, Peter Parker, the Spectacular Spider-Man (PPTSS)  is part of the ongoing story-arc of Spider-Man in the Marvel Universe. Each of the various books from this era had a set of characters they would use, with Peter, MJ, and Black Cat being in the center of the Spider-Man Venn diagram.

As mentioned earlier, we start off in the middle of the gang war between the Owl and Doctor Octopus, both underrated villains in my humble opinion. While both are taken out, you know they will both be back again to cause trouble for Spider-Man.

I love that this book gets to feature multiple return appearances by Cloak & Dagger, the drug-triggered mutants who made their debut in the last volume. While Cloak and Dagger remain focused on ridding New York City of the drug traffic, their methods often put themselves at odds with our title hero. Another anti-hero crosses through this title is the Punisher, who is finally brought to trial for his many incidents. The Punisher is sentenced to prison, which led to his own mini-series, followed quickly by his ongoing series.

As with the Amazing Spider-Man book in this era, we see the Kingpin pulling a lot of strings in the background, with the Rose and the Answer being in the forefront. Kingpin still remains a thorn in the side of Spider-Man on many levels, in particular when the Kingpin aids the Black Cat in giving her powers to allow her to be equal to Spider-Man during their adventures. The Black Cat gets a “bad luck” aura about her, causing bad things to happen to people around her trying to threaten her.

The final issues in this collection feature the return of Spider-Man in his black costume following his adventures on Battleworld. The costume is slick and new and alive, although he won’t find out about the “alive” bit for a few months.

What makes this Essential?: I really like the direction that PPTSS took during this era. It finally feels like the book is now the equal to Amazing Spider-Man and not just a secondary book on the stands. The Marvel Bullpen more evenly coordinated storylines between the books, along with Marvel Team-Up, to create a near-seamless story arc for Peter Parker, yet each title could be read on its own. Creators Bill Mantlo and Al Milgrom had a great run in this era that doesn’t get enough recognition. I think it worth the pick-up, if for no other reason than to revisit the Black Costume storyline post-Secret Wars, which the Essential Spider-Man and Essential Marvel Team-Up series never reached.

If you like this volume, try: The Nearly Complete Essential Hembeck Archives Omnibus collection from 2008. While there are many interesting storylines in this volume, the highlight of this Essential was Peter Parker, the Spectacular Spider-Man #86, featuring art by Fred Hembeck. This issue was part of the Assistant Editor’s Month – while the editors went to San Diego Comic Con, the assistant editors were left in charge for a month and hi-jinx ensued. We got the Avengers appearing on David Letterman; Aunt May and Franklin Richards teaming-up to stop Galactus; and Steve Rogers’ girlfriend Bernie Rosenthol becoming a new super-hero. With this issue of Peter Parker, the story remained true, but Hembeck was brought in to do the art in his very distinctive art-style. Hembeck has been a long-time fixture in the comic scene, offering a humorous look at Marvel and DC characters. In the 1970s, he contributed a comic strip to the Daily Planet pages at DC. In the 1980s, he was a regular contributor to the Marvel Age comic. In 2008, Image Comics put out this trade paperback collection of Hembeck’s fanzine and self-published work. It’s 900 over-sized pages, printed in black and white with the same paper quality of the Essentials, collecting most of Hembeck’s work to that date. With a MSRP of $24.99, it’s an incredible bargain. Give this book a read, and check out Hembeck’s eBay store to get an original sketch.