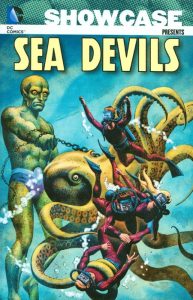 Overview: Meet the Sea Devils – Have flippers, will travel! In the spirit of other Silver Age common heroes such as the Challengers of the Unknown, the Sea Devils are a group of divers who are more at ease under the water than above the water. Biff, Dane, Judy, and Nicky comprise the Sea Devils, who seek out new challenges or missions every other month.

The stories vary from traditional “find a missing treasure” to those dealing with aliens or mystical creatures. Many times, the stories are broken up into segments to give each Sea Devil the chance to shine on their own. And over the course of the series, having served on so many dives with each other, the group develops the mental ability to communicate with each other underwater, which definitely aids in the storytelling of each issue.

Why should these stories be Showcased?: OK, this is going to rank up there (or down, depending on one’s perspective) on my list of least-favorite Showcase Presents volumes. The one redeeming feature of this book is the beautiful Russ Heath art, which kept me going through much of this book. But this title still suffers from the same issues that a title like Challengers of the Unknown faced – telling a unique story that showcases the characters skills each issue. The stories in Sea Devils are very repetitive in nature, and I often got sidetracked trying to determine if I had already read a particular story. If you pick this up, do it for the Heath art only.

If you like this volume, try: the Great Pacific series from Image Comics. Admittedly, once you get past Aquaman and Sub-Mariner, there are not a lot of water-based characters or comics around. (And I am setting myself up, as I am sure I am about to be flooded with book suggestions that I am overlooking here. But I digress….) So Great Pacific ran for 18 issues between 2012 and 2014. In the story, a young oil heir Chas Washington settles on the Great Pacific garbage patch and proclaims it as a new nation. But that makes a lot of people unhappy, ranging from nations to his own family. Writer Joe Harris and artist Martin Morazzo create a visually spectacular story that makes one consider the ecological impact we as humans are putting on our planet. The entire series has been collected into three trade paperbacks, so it should be easy to track down and dive into.