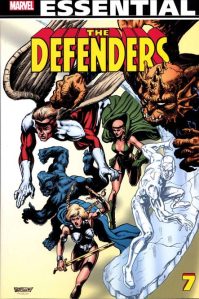 Overview: The Defenders are dead! Long live the New Defenders! As we saw at the end of the last collection, With the core line-up (Doctor Strange, Hulk, Namor, & Silver Surfer) no longer able to work together for fear of destroying the Earth, a new team steps from the ashes to become the New Defenders. From the last run, Valkyrie, Gargoyle and Beast stick around, recruiting Angel, Iceman and Moondragon to join them in this journey.

With the new team, the dynamics between the various members make for an interesting story, sometimes more interesting than the villain of the month that they would battle each month. Who will lead the team? Is it the Beast, who has trained and studied under both Charles Xavier and Captain America? Is it the Angel, whose bank account is funding most of the team’s activities? Or is it Moondragon, who believes that everyone should bow down to the goddess that she believes herself to be?

Regardless who leads the team, we see the story moving forward with hints of things to come. We are introduced to the Dragon of the Moon, who will (SPOILER WARNING SINCE THERE IS NO ESSENTIAL DEFENDERS VOL. 8!) will become a negative influence in Moondragon’s life and lead to the eventual demise of this team (and this title).

But before then, we get lots of adventures of the new Defenders. We even get some solo mini-series involving members of the team. First up is an Iceman miniseries, which ran concurrently with Beauty and the Beast, teaming up the Beast with Dazzler (before she joined the X-Men).

What makes this Essential?: This is the most transformative era of the title that we have seen. For all of the talk about the Defenders not have a set roster, it was always some combination of the core line-up. Now just Valkyrie remains with half of the original X-Men, plus Moondragon and Gargoyle. So, for a change of pace with the characters, this is an interesting read. But it still doesn’t make this Essential. I personally would have rather seen the two mini-series dropped in favor of finding a way to get all of the remaining issues (it ran until #152) into this collection. I think J.M. DeMatteis and Peter Gillis have fun creating new adventures with these characters, with stellar art from the likes of Don Perlin and Alan Kubberberg, but these are not A-list characters to carry a book.

Footnotes: During this run of Defenders issues, the covers reflected the title The New Defenders. However, the indicia in the original issues indicated that the official title still was The Defenders. It wasn’t until issue #140 that the official name listed in the indicia was The New Defenders. Since this collection ends with issue #139, you could make the argument that Marvel collected all of the original issues in the Defenders series in this line of Essentials.

Beauty and the Beast #1 to #4 are also reprinted in Essential Dazzler Vol. 2.

If you like this volume, try: hunting down a copy of The Gargoyle mini-series from 1985. This entire series has never been reprinted, so you will need to hit the back-issue bins to find this. Gargoyle co-creator and writer J.M. DeMatteis, along with artist Mark Badger, finally had the chance to do a solo series featuring Isaac Christians. He returns to his hometown, Christiansboro, Virginia, where Chambers is tricked into returning to his original body. Unfortunately, that allows the one of the demons to return to the Gargoyle shell and begin an attack to destroy the town. With the help of a druid, Christians’ soul is returned to the Gargoyle shell, and the Gargoyle destroys Isaac Chambers’ body so that he can’t be used like that again. This mini-series should have been collected in this volume, perhaps in place of the Beauty and the Beast series since that had been included in the Essential Dazzler Vol. 2 collection four years earlier. 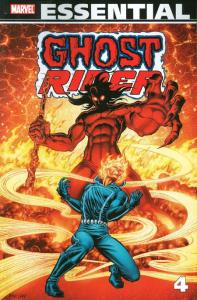