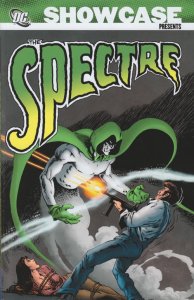 Overview: With his debut in More Fun Comics #52 (February 1940), the Spectre remains one of DC’s oldest characters. Developed by Superman c0-creator Jerry Siegel (with an attributed assist by artist Bernard Baily), the Spectre was originally Detective Jim Corrigan. The good detective found himself the target of hoodlums, who placed him in a barrel filled with concrete and then drowned. However, Corrigan’s spirit is denied entry to Heaven, and must return to Earth to eliminate evil. During this era, the Spectre would serve as a member of the Justice Society of America.

This volume picks up the Spectre’s story in the middle of the Silver Age. The Spectre, along with the rest of the Justice Society, have returned to action in the pages of The Flash and Justice League of America. DC editor Julie Schwartz wanted to see if the Spectre could stand on his own, so he gave the character a try-out in the pages of Showcase, followed soon by appearances in The Brave and the Bold. The interest was there to warrant the Spectre getting his own series, but that only ran for 10 issues.

When we see the Spectre again, it is now in the Bronze Age, and the haunted hero is now a feature in Adventure Comics. These stories show the dark potential of the character, as the Spectre exacts brutal punishments to those committing evil acts. This run lasted around a year, before the pages in the book were given over to Aquaman.

The volume concludes with multiple other appearances of the Spectre in team-up books and as a backup feature in Ghosts. However, although not collected in this book, our hero could still be found making appearances in Justice League, All-Star Comics, and All-Star Squadron.

Why should these stories be Showcased?: This is a mixed volume in terms of the types of stories collected. You get the superhero aspect with the various team-ups, the angel of vengeance in other stories, and would-be horror anthology host in others. So there might be some type of story that you can find in here that you will enjoy. But reading these in consecutive order, the character seems under-utilized most of the time. It’s not until much later, specifically the 1990s, where I feel like a writer and artists finally found the full potential of the character.

Earth(-2) Angel, Earth(-1) Angel: So which DC Earth do the Spectre stories take place in? For the stories that involve the Justice Society members such as Wildcat, those take place on Earth-2. For his team-ups with Batman, Superman, and the Flash, those take place on Earth-1. As for the rest, well, I think that is up to the reader to decide. The Spectre seems to not be bound to any one Earth in particular, especially when the story is scripted by Bob Haney.

If you like this volume, try: The Spectre series from 1992. The series ran for five plus years, and it was written entirely by John Ostrander. The series focused on the Spectre serving as the embodiment of the Wrath of God, dealing out punishments for murders of any kind. Ostrander is a former theology student, and his knowledge and experience were reflected in the story topics found over the course of the series. The first 22 issues of the title were recently reprinted in trade paperbacks, but you will need to hit the back issue bins to track down the remainder of the series. Well worth the hunt!