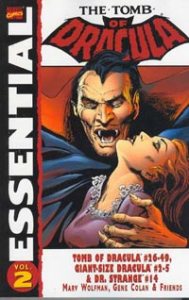 Welcome back to The Tomb of Dracula, the legendary run by Marv Wolfman, Gene Colan and Tom Palmer. Having worked on the title for more than a year, the creative team have found their stride with the title, putting together some of the best stories in the run of the series.

Picking up where things left off in the last collection, Dracula is believed to be dead, which leads his pursuers to go their separate ways. Taj returns tot India, where we discover that his wife is crippled and his own son is a vampire. Frank travels to Brazil, where he encounters zombies and the mysterious Brother Voodoo.

Meanwhile, Dracula realizes that this powers are waning, and must track down the reason for his condition. Following the clues, he travels across to Europe, taking on assignments to move him forward in his weakened condition. Eventually, the clues point him to America and Dr. Sun, who apparently did not die in their last battle seen in Volume 1.

Dracula crosses the Atlantic to America, where he sets up his operations in Boston. There, he meets a new ally in Harold H. Harold, a would-be writer of vampire tales. Harold hopes to leverage his friendship as a source for new stories. Dracula revives long enough to confront Dr. Sun, only to be killed by a henchman.

As can be expected, there is no quiet way for a vampire to travel, and eventually Quincy Harker and his team are back on Dracula’s trail, following him to America. Realizing how strong Dr. Sun has become, the vampire hunters conclude that the enemy of my enemy is my friend, and bring Dracula back to life to help them in their battle. Dr. Sun is eventually defeated and Dracula regains his powers.

Following a meeting between Dracula and Doctor Strange, the vampire turns his attention to establishing a base of power in America. He joins up with the Church of the Damned in Boston. He meets Domini, a beautiful woman who has given herself over to the church, and decides to take her as his new bride. Dracula plans on siring a new child, with the goal of taking over the church to expand his reach. Unfortunately, the church has plans to use the offspring to take down Dracula once and for all.

What makes this Essential?: Wolfman, Colan and Palmer reach their peak with this collection. The stories and art are more solid than the previous and next volumes. Dracula finally feels like a threat, yet he remains a character you want to see succeed in his actions. I like setting the stories in America, as it gives the entire team a more comfortable environment in which to tell the stories.

If you like this volume, try: the Doctor Strange vs. Dracula trade paperback from 2006. Yes, it does reprint the crossover already collected in this Essential, but it also includes a five-part story from Doctor Strange #58 to #62 from 1983. In this story arc by Roger Stern and Dan Green, the two title characters are searching for the Darkhold, a book with untold secrets. One of those secrets can bring an end to all vampires on Earth. Dracula and Doctor Strange go back-and-forth in their quest to claim the book, which also brings in Blade and the Avengers.

Overview: In the early 1970s, the Comics Code Authority started relaxing its standards, opening the doors for comic book publishers to get back into the business of publishing horror titles. Having already introduced Morbius as the “Living Vampire” in the pages of Amazing Spider-Man, Marvel was ready to get back into the monster business. First up was the king of the vampires with The Tomb of Dracula.

Perhaps as an indication of the madcap rush to get the title to press as quickly as possible, Tomb of Dracula went through a long list of writers over the first six issues. Gerry Conway is credited with writing the first two issues, but the bulk of #1 was actually written by Roy Thomas and Stan Lee. Conway left after the second issue because of better writing opportunities, and Archie Goodwin took over, but only for issues #3 and #4. He was followed by Gardner Fox, who wrote issues #5 and #6. Fox was relieved of his duties on the title, and Marv Wolfman took over. It took Wolfman a few issues to get comfortable with the title character and the supporting cast introduced by the previous five writers. But once he does find his footing, the series picks up and becomes a hard book to put down.

What does remain constant is the art duties of Gene Colan, who handles all of the pencilings for the issues in this volume (as well as this series). Colan’s art is just a breath-taking as his run on Daredevil, just with less spandex.

For the story itself, after a hundred years of a stake-induced slumber, Count Dracula is revived and begins his quest to reclaim his spot in a changing world. But Dracula’s return to action does not go unnoticed, and a group of would-be vampire hunters is soon on his trail:

Outside of a crossover with the Werewolf, there is very little about this book that ties it into the Marvel Universe proper. In future volumes, we will see appearances by Doctor Strange and Brother Voodoo, but in general, this is not a title that you have to read a lot of the other Marvel titles in order to understand. Conversely, characters like Blade and Hannibal King will become more prominent in other titles, with Blade actually crossing the break-out success point in the 1990s to warrant his own series, a trilogy of movies, and a syndicated television show.

What makes this Essential?: Once Wolfman takes over, I really liked the book, which came as a great surprise to me. I only picked up this book a few years ago because I found it for a good price on eBay, and the collector mentality in me is obsessing to get all of the Essentials. I’ve never been a big fan of the monster concepts, either in the original novels, the classic films, or these legendary comics. So, for now, at least, I am hooked on this concept, this presentation. I should have known that with my great love for Gene Colan’s work, I should have picked this book up earlier! I do think that the black-and-white format works better for this title, even though I know it was presented in color with it was first published. I like that this story feels timeless, in that this same story could be told today (albeit with slight differences such as replacing cord phones with cell phones) and still be just as effective.

Footnotes: Werewolf By Night #15 and Tomb of Dracula #18 are also reprinted in Essential Werewolf by Night Vol. 1.

The entire 70-issue run of The Tomb of Dracula was penciled by Gene Colan, who used the image of actor Jack Palance as his model for Dracula.

If you like this volume, try: tracking down a copy of The Curse of Dracula, a three-issue mini-series from Dark Horse Comics in 1998. This series reunited Marv Wolfman and Gene Colan on the Dracula character, but it is not officially tied to their work at Marvel with the character. Jonathan Van Helsing leads a team of vampire hunters to the fog-covered streets of San Francisco to help solve a series of mysterious murders. It was reprinted as both a hardcover and a trade paperback, but this might be a series that is easier to find in the back-issue bin.