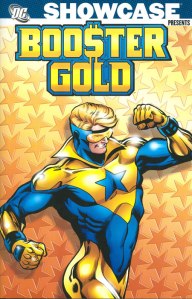 Overview: In the 25th century, down-on-his-luck Michael Jon Carter is working at the Space Museum as a night watchman. As a promising football star nicknamed “Booster”, he was banned from the sport when it was revealed he took money to throw a game. Deciding to take advantage of his knowledge of the past, Carter steals a Legion flight ring and force-field belt and uses a time bubble to travel to the 20th century. There he sets himself up as a new superhero, Goldstar, in Metropolis, the hometown of Superman. He sets up a corporation for himself, to handle commercials and endorsements. During his first debut as a hero, he bumbles his own name, and the President introduces our hero to the world as Booster Gold!

Stuck with the botched code name, Booster Gold is the toast of the town, and in the targets of many people. New villains sprout up, such as Blackguard and Chiller, working for a criminal organization known as the 1000. Booster sister Michelle follows her brother back to the 20th century, where she becomes the hero Goldstar. Life is going well for Booster, right?

Unfortunately, life goes wrong for Booster – again! Booster’s sister is killed in battle. His wealth is taken away by his agent, who is secretly a Manhunter. Booster Gold realizes that he can still be a hero without the fame and money that motivated him in the past.

Why should these stories be Showcased?: I was ready to dismiss this volume, having lived through it’s run 28 years ago. But on the re-read of this title, I have to reconsider my position on this. First, Booster Gold was one of the first NEW heroes to debut in the new post-Crisis universe. While there have been times when he has been nothing more than comedy relief, he has been an active character in DC Comics for nearly 30 years now.

These stories also represent the changing view of heroes in the mid-1980s. Following works like Watchmen and The Dark Knight Returns, heroes were no longer goody-two-shoes. At the start of this title, Booster Gold is not a likable person. He stole a Legion ring and a force field belt and traveled into the past with the intent of using his knowledge of history for monetary gain. His actions are based on what the reward is for him, and not for the betterment of others. It’s only after Booster Gold’s life bottoms out that he realizes the mistakes he has made along the way, and now must overcome his legacy of the corporate hero in order to become a true hero.

Footnotes:  The cover to Action Comics #594 is a direct homage to the cover of Booster Gold #7.

If you like this volume, try: reading Justice League International from the mid-1980s. Known as the “Bwah-Ha-Ha-Ha!” era, this book was put together by the creative talents of J.M DeMatteis, Keith Giffen, and Kevin Maquire. Following the events of Crisis on Infinite Earths, the Justice League of America as we knew it broke up, and the title itself came to an end. In the Legends mini-series that soon followed, many heroes made their first appearance in the post-Crisis universe, including the new Justice League. This was a team of the 1980s, organized by business mogul Maxwell Lord. More emphasis was put on recruiting new heroes, with very few ties to the old League. Taking a page from the Marvel style, this Justice League fought with each other (“One punch!”), told jokes, and did not take themselves all too seriously. Booster Gold joins the team in Justice League #3 and becomes a core member for the next 10 years. DC has recently started collecting these issues in new hardcover and trade paperback editions, so it should be easy to track them down!