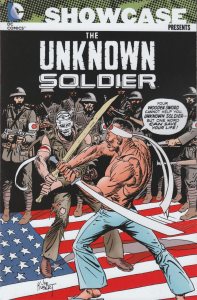 Overview: In Two In every war, there is a man who no one knows, yet who is known by everyone. He wears a thousand faces — fights countless battles — and proves that one man, in the right place at the right time, can make the difference. This is Showcase Presents The Unknown Soldier Vol. 2.

Once again, the Unknown Soldier takes on the missions that no one else could handle. With the ability to wear any face, the Unknown Soldier can pose as any man — or woman — allowing himself to work his way behind enemy lines and sabotage the Axis efforts to win the war. Sometimes the Unknown Soldier must rescue someone, other times he must destroy a base or weapon to keep it from turning the tide of war. Most of the stories are set in Europe, but we do get some stories set in the Pacific or Northern Africa.

The one change to these stories is the introduction of a supporting character. Chat Noir is a former U.S. soldier who now works with the French Underground. He provides support and someone for the Unknown Soldier to interact with while on the missions.

Why should these stories be Showcased?: I believe I enjoyed this volume slightly more than the first volume.There is a little bit of continuity from issue to issue, via multi-part stories or the addition of a supporting cast in Chat Noir. The art from Gerry Talaoc and Dick Ayers stands out in the black & white format. The stories from David Michelinie and Bob Haney are serviceable, following the standard format of setting up the Unknown Soldier in a dire situation on pages 1 & 2, a flashback on pages 3-5 showing how he got into that situation, and then 5 pages or more to get out of the trap and complete his mission. I think I enjoyed this series more than say Sgt. Rock or even Sgt. Fury, where the large supporting cast sometimes gets in the way of telling the story.

Footnotes: The Unknown Solider ran until #268 (October 1982). The character has had multiple miniseries over the years, either due to a new story to be told or to keep the copyrights on the character.

If you like this volume, try: the Vertigo-published Unknown Soldier series from 2008. The series is written by Joshua Dysart, with art from Alberto Ponticelli. Set in Uganda during the 2002 civil war, Moses Lwanga is a doctor who is doing his best to protect his family and patients amidst the chaos of the war. But he suffers from nightmares, where he sees himself killing others like a soldier would. Donning the bandages to his face, Lwanga becomes the Unknown Soldier, trying to make the situation better by any means necessary. Along the way, the reader discovers a connection between Lwanga and the original Unknown Soldier from World War II. The series ran for 25 issues and has been collected in four trade paperbacks. The early trades appear to be out of print so you may need to go back issue bin diving to locate this incredible story.

Overview: Two brothers from a Kansas farm enlist in the Army at the onset of World War II, and are assigned to the same unit serving in the Philippines. Trapped in a foxhole, one brother jumps on a live grenade to protect his sibling. While the grenade killed the first brother, the second brother is horribly disfigured. Given the option of a medical discharge, the disfigured soldier turns it down, wishing to remain on duty. His late brother had made a comment that one man in the right place can affect the outcome of a battle or a war. He takes on the designation of The Unknown Soldier, and returns to the front lines, undertaking special missions.

These stories are generally one-and-done stories, which alternate between the European and Pacific fronts. The stories follow a predictable formula, all the way down to the page layouts to start each story. Towards the end of this volume, we get two multi-issue stories. Otherwise, these stories could be read in any order.

Why should these stories be Showcased?: This is an interesting volume. From a historical perspective, these stories should be showcased. Anything that Joe Kubert worked on should be reprinted, and his art shines brighter in the black & white format. My concern is that I don’t think this is Kubert’s best work in the medium. I think you need to read his Sgt. Rock stories to really experience a Kubert war comic.

Footnotes: Star Spangled War Stories #157 reprints a Sgt. Rock story where Easy Company encounters an unknown soldier but not “The Unknown Soldier”. That original story, from Our Army At War #168, was reprinted in Showcase Presents Sgt. Rock Vol. 3.

If you like this volume, try: Joe Kubert’s book, Fax from Sarajevo: A Story of Survival. Based on communication from European comics agent Ervin Rustemagić, Kubert put together a disturbingly real look at what modern warfare looks like, detailing the Serbian takeover of the agent’s homeland. Rustemagić and his family survive for nearly two years before finally escaping Sarajevo for good in 1993. During this time, Rustemagić would communicate with the outside world via a fax machine, giving updates of the situation. One of the recipients of the faxes was Kubert, who later worked with Rustemagić to turn this into a graphic novel. Released in 1996 by Dark Horse Comics, Fax from Sarajevo received multiple awards both within the comics industry as well as within the publishing industry.