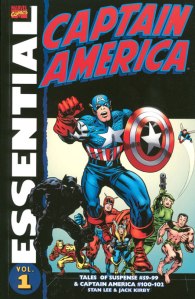 As with many Silver Age stories of the era, familiar plot points are brought up issue and issue. Steve Rogers is a stranger in a strange land, trying to acclimate himself into a new era. Memories of his deceased sidekick Bucky haunt Captain America, not only in his dreams but also in the real world with his encounters with Rick Jones. And while evil has advanced to new levels, the faces behind them remain the same, with arch foes from World War II such as Baron Zemo and the Red Skull.

There is a stretch of issues in the first year of the Captain America feature that re-imagine the Simon & Kirby Captain America stories from the 1940s, giving the new comic readers of 1964 a look back to the early days of the character. As the storyline progressed, new allies and threats were introduced that would become mainstays for years to come. The blonde beauty Sharon Carter was introduced, who at the time was the younger sister of Peggy Carter, one of Captain America’s wartime associates. As we got to see more of S.H.I.E.L.D., a comparative rival organization sprung up by the name of A.I.M. (Advanced Idea Mechanics). From the A.I.M. labs come the living computer M.O.D.O.K., and the first appearance of the Cosmic Cube.

What makes this Essential?: It’s hard to say anything negative about a Stan Lee and Jack Kirby story. These are decent stories, but not exceptional stories. There are many issues that felt like a repeat of the previous issues – whether that was intentional or accidental, I don’t know. I think the best way to read this would be concurrently with Essential Avengers Vol. 1 and Vol. 2. The first story in this volume came out the same month that Avengers #10 did, so pick up there and alternate reading the stories between the two volumes. Both sets of stories make references to events in the other book, and the Avengers make numerous appearances in the Captain America stories in Tales of Suspense.

Footnotes: In the credits for this book, the Golden Age Captain America story is attributed to Captain America Comics #10, written by Stan Lee and art by Joe Simon. However, the ComicBookDB website and the Grand Comics Database website both attribute the story to Captain America Comics #5, written and drawn by Joe Simon and Jack Kirby.
The family relationship between Peggy Carter and Sharon Carter has changed over the years, as the stories moved further and further away from the fixed time-point of World War II (1939-1945). Initially, Peggy and Sharon were sisters. Later revisions made Peggy an aunt to Sharon, to allow for the greater difference in age if Peggy was to have served during World War II.

If you like this volume, try: the two Captain America: Winter Soldier trade paperbacks, that collected the first year of the 2005 relaunch of the Captain America title by Ed Brubaker and Steve Epting. Brubaker and Epting took Captain America back to the 1960s feel with a political espionage storyline with the Red Skull controlling things in the background. The Soviets have obtained a Cosmic Cube, and Captain America is brought in to clean things up. Along the way, Captain America comes face-to-face with the Winter Soldier, which turns out to be Steve Rogers’ worst nightmare come back to life. The Brubaker-Epting run on this title is one of the best Captain America story-arcs, and it all starts with these volumes. With the upcoming Captain America movie in 2014, these stories will become very popular to track down.