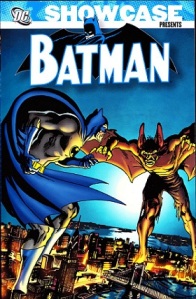 Overview: It’s time to head back to the Batcave for another set of Batman adventures. But wait, what’s this… the Batcave is closed? This is Showcase Presents Batman Vol. 5.

This volume looks at the Batman stories from the early 1970s. Dick Grayson has finally left to go to college at Hudson University, and Bruce Wayne (and Alfred) suddenly realize how large and empty Wayne Manor feels now. So they close up the Manor (and the Batcave) and relocate to the Wayne Foundation tower in downtown Gotham City. Bruce lives in the penthouse suite but has a secret elevator to a hidden garage where the Batmobile is stored. This keeps Batman in Gotham at all times, allowing him to respond quicker to threats to his city.

But just because he is away at college doesn’t mean that we do not see Robin in this collection. He still makes the occasional appearance, such as in Batman #222, when they are tasked to discover the truth behind the rumors surrounding a Beatles-type group and  the possible death of the lead singer, Saul Cartwright. (This was cashing in on the ever-ongoing rumor that Paul McCartney had died years previous and had been replaced in the Beatles.)

A major new addition is added to the Batman Family in Detective Comics #400, with the introduction of the Man-Bat. Kirk Langstrom is a curator at the Gotham City Museum, and he has a keen interest in bats. Developing a serum, Langstrom hopes to modify himself into the next generation Batman. Unfortunately, the serum does not work as planned, and Langstrom is transformed into a living man-sized bat. With the origin of the Man-Bat in place, Batman works to stop as well as cure Langstrom. The curator is returned to normal, but we know that the Man-Bat will return multiple times in the future.

Why should these stories be Showcased?: A lot of the problems that I had with Vol. 4 still carry over into this collection. While there is nothing wrong with focusing on the Batman as a detective, these issues have me wanting more. If you have an artist of the caliber of Neal Adams on the title, should you be using him to draw common street criminals month after month? The redeeming point of the book is that towards the end, we start to see Denny O’Neil introducing the story elements for the future stories to be read in Vol. 6, where we will finally be introduced to Ra’s al Ghul.

If you like this volume, try: The Joker series from 1975 and 1976. During the period collected in this volume, more emphasis was being put on Batman being a detective. When he did battle “villains”, it was newer creations such as Man-Bat, the League of Assassins, and Ra’s al Ghul. The more colorful villains that we associate with Batman, such as the Joker, Penguin, Riddler, and Catwoman, were only being used in The Brave and the Bold from time to time. In early 1975, DC launched a bi-monthly series focusing on the Joker. With the Comics Code Authority still in place, the creative team had to adhere to a lot of rules in order to feature a villain as the protagonist. The Joker could not kill, he had to be captured at the end of each story, and Batman could not be used in the book. Even without the Caped Crusader, plenty of other characters made appearances in the run, such as Commissioner Gordon, Green Arrow, Black Canary, the Creeper, Catwoman, Two-Face and even Sherlock Holmes. The series ran for just nine issues, and the entire series was reprinted in a trade paperback in 2013.