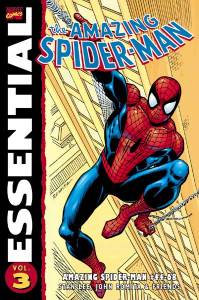 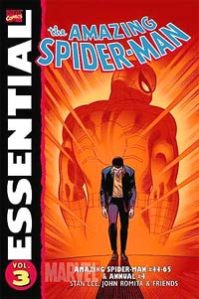 Peter Parker tries hard to balance his crazy life – attending classes at Empire State University; working as a freelance photographer for the Daily Bugle; allocating time for his girlfriend Gwen Stacy, his friends, and his Aunt May; and using his abilities to protect others as Spider-Man. Ongoing story arcs showcased villains, like the Green Goblin or the Kingpin, manipulating people from the shadows, testing the limits of Spider-Man.

What makes this Essential?: This is an interesting volume. During the Stan Lee-Steve Ditko years featured in Volumes 1 and 2, most were one-and-done stories featuring the villain-of-the-month. In this volume, you see Lee start to fully develop all of the characters, making them real people versus just a way to advance a story. Peter is not the only character to have life problems. New characters such as Joe Robertson and Captain Stacy provides Peter with new father figures that he can talk to and seek out for advice.

The cover to Amazing Spider-Man #50, used as the cover art for the second edition, is one of the most iconic covers of all time. It has been homaged dozen of times with other comics, and used in the Spider-Man 3 motion picture.

If you like this volume, try: Marvel Visionaries: John Romita Sr. While he is most closely associated with Spider-Man, Jazzy John Romita managed to work on most every Marvel title at some point. In the 1970s, Romita became the Art Director for Marvel, providing direction of how Marvel books should look. This volume collects the two-part Daredevil story featuring Spider-Man (which served as an unofficial tryout before taking over Amazing Spider-Man from Ditko); Fantastic Four issues he did following the Kirby run; and assorted stories featuring the Hulk and Captain America. Also included are some romance and sci-fi stories that he did for Timely Comics, before it was rebranded as Marvel Comics.