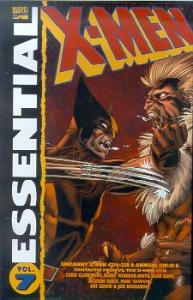 Overview: After the events contained in the last Essential X-Men, you have to wonder where the X-Men can go from here. The Mutant Massacre have left the X-Men at half-strength, with Colossus, Nightcrawler, and Shadowcat severely injured. Magneto is overseeing the New Mutants, and the X-Men team is down to the still-powerless Storm, Wolverine, Rogue, and Psylocke.

First up is to build up the ranks of the team. During a battle in the Mojo Universe that involved the X-Babies, Longshot returned with the team to Earth and became a member of the team. On a chance encounter, the X-Men extend an offer to Dazzler, the mutant with light powers that was first introduced prior to the Dark Phoenix Saga. Next up is Havok, the younger brother of Cyclops that once did time with the X-Men in the 1960s. He rejoins the team, as the world has become dangerous to all mutants with the Marauders on the loose. During this time, Havok’s former sister-in-law, Madeline Pryor, starts hanging out with the X-Men, leading to some awkward interactions when they cross paths with X-Factor.

While a lot of these stories are one or two-parters, the overarching storyline is building to a confrontation in Dallas, known as the Fall of the Mutants. This event also crossed over with X-Factor (see Essential X-Factor Vol. 2) and New Mutants, but each title had its own story thread under the Fall of the Mutants banner. Storm has traveled to Dallas to find Forge, and force him to find a way to return her powers to her. The X-Men follow and encounter Freedom Force, led by Mystique and comprised of the former members of the Brotherhood of Evil Mutants. Storm and Forge are battling the Adversary, a foe that has been tormenting Forge for years. The only way to stop the Adversary is by the X-Men sacrificing themselves, which they reluctantly do if it will save the Earth.

However, the sorceress Roma, who had been saved by the X-Men during this battle, saves the souls of the X-Men and gives them the chance to live again. They are still considered dead because they could put their loved ones in danger if it was known that the X-Men were still alive. As a side effect of saving them, the X-Men find out that their images cannot be recorded by electronic devices, keeping them hidden from most of the world. The volume ends as the world mourns the loss of the X-Men, and the X-Men prepare for a new direction for the team.

What makes this Essential?: I find it a challenge to review some of these volumes that collect issues that I originally collected off of the newsstand spinner rack. Truth be told, I think I actually had a mail subscription to Uncanny X-Men in this era. When I was reading this month-to-month, in a world without the Internet and spoilers, we were on the edge each month wondering where Chris Claremont and friends would take the mutants in the next issue. Twenty-five years later, reading them all in a row in a short time period, I really start to appreciate the grand vision that Claremont was laying out for us. This is a good volume for the X-Men fan. However, if you want to read the full Fall of the Mutants storyline, you need to pick up the Omnibus that collected all of that storyline.

If you like this volume, try: The X-Men vs. The Avengers mini-series from 1987, 25 years before the AvX nonsense of 2012. Released around the same time as the Fantastic Four vs. the X-Men mini-series, it was not included in this volume. The story takes place shortly after the events of Uncanny X-Men #200 when Magneto is brought to the World Court to be held accountable for his actions in Uncanny X-Men #150. The Russians are still upset with Magneto for his actions, and send the Soviet Super-Soldiers after him. At the same time, the Avengers are called on to stop a pair of asteroids falling towards Earth. They discover that one of the asteroids is Magneto’s former headquarters, so it is time to pay a visit to the X-Men. As with any of these meet-ups, a confrontation ensues pitting the teams against each other. The original plot by Roger Stern called for Magneto to resume his evil ways in the final issue, but Marvel editorial stepped in, wanting to let the Magneto story play out in the pages of Uncanny X-Men under Chris Claremont. That may help explain why Jim Shooter gets a writing credit for #4. This has been collected a couple of times, most recently as a premiere edition in 2010.