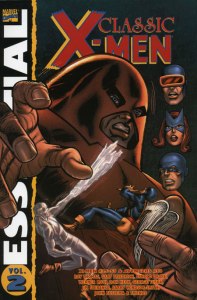 Overview: Welcome back to Xavier’s School for Gifted Youngsters. With a small enrollment, headmaster Charles Xavier is able to focus and help each student develop to the fullest extent of their abilities. Mutant abilities, that is! As all of the students are members of the X-Men, mutants working to build a world that homo-sapiens and homo-superior can live side-by-side.

In this volume, we get the first new member to join the team, as Mimic comes on board. However, he left quickly after fighting with Cyclops and losing his ability to mimic others’ abilities during a fight with the Super-Adaptoid. At this same time, future X-Man Banshee is introduced as a foe, but soon becomes a loyal friend to the X-Men. At the end of this volume, we do meet Lorna Dane, but more of her story will unfold in Essential Classic X-Men Vol. 3.

Now, over the years, many people have claimed that Charles Xavier can be an ass. A story arc in this volume would be Example #1. During a battle with Grotesk, the X-Men believe that Xavier has been killed. The students bury their mentor and figure out how they will function going forward. Out of nowhere, Xavier returns alive and well. Turns out he had been hiding in a secret basement at the mansion, so he could mentally prepare to stop an alien attack. Xavier hired the reformed criminal known as Changeling to impersonate him, giving him some of his mental powers. So it was the Xavier-impersonator that died in battle with Grotesk. Trust me, this is just the first of a long list of Xavier’s foibles.

Towards the end of these issues collected, a new format was introduced into the books. The stories would run around 15 pages, and then there would be a 5-page back-up which slowly revealed the origins of the original X-Men. In this volume, we get the origins for Cyclops, Iceman, and Beast.

What makes this Essential?: I actually feel that these stories are better than those found in Essential Uncanny X-Men Vol. 1. While I do not want to besmirch the work of Stan Lee and Jack Kirby, I don’t believe the X-Men were ever their top priority. I think when writer Roy Thomas comes onboard, he is able to put his full effort into the stories, and we see the characters start to develop, becoming individuals with unique costumes and not just chess pieces controlled by Xavier. I almost think the casual X-Men fan would be better off starting with this volume first before ever reading Essential Uncanny X-Men Vol. 1.

If you like this volume, try: Marvel Visionaries: Roy Thomas, which collects assorted issues from Thomas’ legendary career at Marvel. In the early 1960s, Stan Lee realized he needed help and hired Thomas to come in as an assistant. He was quickly promoted to writer, and one-by-one, Thomas would scribe the adventures of nearly every significant Marvel title at some point in the 1960s and 1970s. By my count, he has stories reprinted in over 35 Marvel Essentials (plus 2 DC Showcase Presents). The stories collected here give the reader some of the many highlights from Thomas’ resume – The Avengers, the X-Men, the Fantastic Four, Spider-Man, Iron Man, Hulk, the Invaders, Dr. Strange, and Dracula.