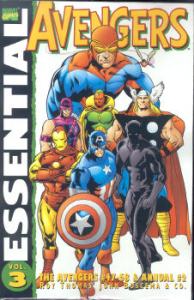 Overview: Welcome to the Mighty Avengers! Writer Roy Thomas takes full control of the issues collected in this volume, putting his own vision (pun intended) into the team. The Avengers welcome two new members: Black Panther is brought in from the pages of Fantastic Four; and the Vision is introduced as a villainous pawn who overrides his original programming and stands with our heroes. Hank Pym adopts yet another identity in Yellowjacket, and Clint Barton discards his bow and arrows as Hawkeye to take over as the second Goliath on the Avengers team. A new Black Knight is introduced, but he will not officially join the Avengers team until the next Essential volume.

We also get the introduction of two foes that will plague the Avengers for decades to come. The Grim Reaper shows up to take vengeance on the Avengers for the death of his brother Simon Williams, the original Wonder Man from Avengers #9. Things would get much more complicated when it is discovered that the Vision has the memories of Simon Williams, making him a step-brother of sorts to the Grim Reaper.

And Hank Pym inadvertently unleashes an evil unto the world with his creation of Ultron, a self-replicating robot that desires nothing more than world conquest. Ultron places the Vision into the team as a traitor, only to be betrayed by the synthezoid. Ultron would return over and over again, with plans of ruling the planet and punishing his “father”.

What makes this Essential?: I see a transition in the Avengers title in this era. The team becomes less focused on being the world’s mightiest heroes, and instead becomes one large family, albeit dysfunctional. Early stories in this volume deal with the Scarlet Witch and Quicksilver trying to break their connections with Magneto. Pym “fathers” Ultron, who in turn “fathers” the Vision. Grim Reaper seeks vengeance for his brother, and finds his brother’s personality and memories alive in an android. Hawkeye comes face-to-face with his long lost brother. And Pym and Janet Van Dyne tie the knot in the first wedding ceremony at Avengers Mansion, creating a whole-new dynamic for the team with married super-heroes. This may sound a lot like a soap opera, but it works for the Avengers. As a reader, I want to keep coming back to see what is going to happen next to these characters. These family issues is what made the Avengers so fascinating throughout the 1960s and 1970s.

Beginning with issue #62, the word “Mighty” was added on the cover, making the cover title read The Mighty Avengers.

If you like this volume, try: the Last Avengers Story by Peter David and Ariel Olivetti. Issued in 1995 during the painted art wave of comics, this prestige format book takes place some number of years in our future. Ultron has destroyed Avengers Mansion and the team inside. Fueled by grief and anger, Hank Pym tries to assemble what remains of the Avengers team to defeat Ultron one last time. Gathering up the Wasp, Hawkeye, She-Hulk, Human Torch, and Cannonball, this Avengers team takes on Ultron, as well as the Grim Reaper, for a final resolution. This story has been collected multiple times, most recently in the Avengers: First to Last collection from 2008.